A Trip to Purgatory, Part 1

Last year while on Ireland’s Beara peninsula, I took a side trip to purgatory. Now
I can hear you groaning from here; still listen to me, I have the photographs to prove it. But before I show you what purgatory looks like, I want to tell a story. And it might take a few posts to do it. But if you have ever wondered, my friend, what lies between heaven and hell, stick around.

During my trip in 2010, I hiked approximately 70 miles of rural Ireland. With backpack, camera, water and a supply of dark chocolate, I set out each day to see the small towns, stark coastline, and backcountry of the Beara. I think about those days often. On one particular sojourn, I came to a church ruin. Now Ireland is loaded with ruins, some dating back to the Neolithic. Yet I found this one particularly intriguing. It was the church of Kilcatherine, or in Galelic – Cill Chaitighern. 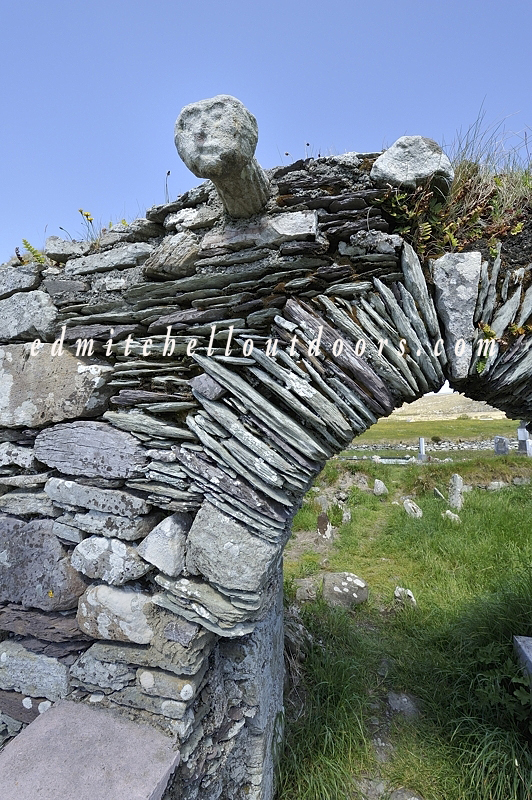 Sitting on a knoll, the church overlooks the ocean, with the mountains of the Beara hanging in the distance. Its a humble stone structure, dating from the 7th century. Back then pagan and Catholic beliefs were fighting for hearts and souls of the Irish people. And this ruin holds a testament to that struggle. Over the south entrance to the church, there is a small gargoyle. It is said to represent the Cat Goddess, an ancient mythological diety. In order to replace such pagan beliefs, Catholic missionaries assimilated some dieties and simply renamed them. Clever,that. Hence it is believed that the Cat Goddess morphed into St. Kilcatherine. Alright, time for part 2.….