A couple of weeks ago, I purchased a second-hand Orvis T-3 fly rod. You’ll see it a few posts back. Well lightning struck again. The same angler that sold me the T-3 offered me another rod. This time a rare beast indeed – an Orvis  Powerflex Boron/Graphite fly rod. It is a 9 foot, 2 piece, 10-wt, that previously belonged to an Orvis dealer. The butt is boron, the tip is graphite, and the rod is in terrific condition.

The Powerflex Series was short-lived, available for a few years, starting back around 1978.  At that time, Orvis had entered the graphite rod game only about 5 year prior. So what prompted them to switch to boron? Most likely the efforts of Don Phillips, an aerospace engineer, living in nearby Connecticut. Don handmade the world’s first boron fly rod in 1972, and was actively trying to perfect the process. The word was out. Boron might be the wave of the future. It was stiffer than graphite, and five times stronger than steel.

While today Winston successfully uses boron, back then it proved to be a problem for both Phillips and Orvis. It was not only more expensive, it was heavier than graphite. This 10-wt tips the scales at a meaty 6 3/8 ounces. (Today, a fly rod of this size would be an ounce or even two lighter.) Given how much lighter competing manufacturers rods were, Orvis quickly discontinued the Powerflex Series and returned to graphite.

All of this was taking place at a time the saltwater fly-fishing was just beginning to get popular. (Lefty Kreh’s Fly Fishing in Salt Water appeared in 1974).  So saltwater fly rods were still in their infancy. (Back then I relied on 2 fiberglass 10wts, a Fenwick and a Winston.) Consequently, action, blank material, tapers, grips, guides, and reel seats were all being rapidly explored by rod builders.

An Orvis Boron/Graphite compared to an Orvis T-3

For example, compare the grip and the reel seat between the Powerflex and the T-3. In the twenty plus years that separate these two rods, you can see the evolution. The boron rod has a plain uplocking reel seat. The T-3 has a very attractive reel seat, with a built-in fighting butt. Now look at the grips. The Boron rod has a poorly formed full wells of 8″ in length. Big even for my large mitt. The T-3 has a 6 3/4″ properly shaped grip. Much better, lighter, and more comfortable. 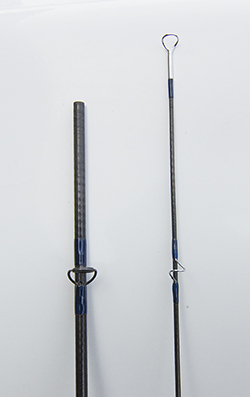 Both rods have tip-over-butt ferrules. But the boron rod’s ferrule is huge and very bony, with a female section measuring 5″ long! The T-3’s female ferrule measures 1.5″  Quite a difference. By the way the Powerflex has a staggered ferrule. When you take it out of the sock you’ll notice it right off. The tip is longer than the butt. No, nothing is broken. Given the differences in properties between boron and graphite, Orvis shortened the butt to help improve the overall action.

How does the Orvis boron rod cast? Well I had to find out.   So I took it out on the grass and lined it up with an Airflo Tropical Punch 10-wt floating fly line. You can immediately tell why they called it a Powerflex. This thing is a wicked cannon. With a single backcast it launched the entire fly line. Impressive! Granted, this rocket launcher is best in the hands of a strong, experienced, athletic caster. The faint of heart should not apply. Still an amazing rod in its own right.

Why did I buy this old rod? Well the price was right. But there is something else going on here. With it I complete a self imposed goal of owning and fishing the brine with every known type of saltwater fly rod – cane, glass, graphite and now boron.  Done is done, at least until something new comes down the pike!

Update: 2020  I’m not a collector and do not stay up on the tackle market place. But I just learned that eBay folks are asking $699 for these boron puppies? I’m surprised. What they actually sell for is, of course, another matter.  If you’re interest in my rod, which is in fine condition, make me an offer.