Tailing Reds in the Fog

Last night I put the Adios on the roof of the car, knowing there was a minus low tide today, right at dawn. By 5:00 AM the coffee was perking. By 6:30 AM I was paddling – out into the fog. It was thick, real thick. The water was dead still, making any surface movement instantly apparent. Bingo. I saw reds as soon as I got to the flat. No many but enough to make things exciting. There they were – tailing reds in the fog. 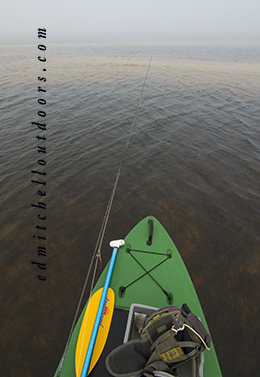 A Foggy Morning on the Flats

On a shallow flat, the noise of a paddle will spook reds. So I quickly stowed it and switched to a push pole. Not only is poling much quieter, it allows me to better maneuver the kayak. With a pole you can stop on a dime. Back up. Spin right. Spin left. Even spin completely around. You name it. I built my own push pole. It was cheap and easy.

After getting as close as I dared, I got off the Adios. Then with my trusty Scott STS 6 wt in hand, I waded slowly toward the tails. Sometimes a red with tail for a minute or more, giving you time to sneak up for a cast. Other days they tail and move almost immediately. Today was one of those gigs. That made it nearly impossible to deliver a proper cast.

I found more reds about 50 yards farther on. Climbed off the Adios again, but the same “tail and move” behavior was going on there too. Not good. All I every got off were two casts in the general direction of fish. Next, things got even worse. A north wind began humming down the flat. With the arrival of the front, the reds all disappeared. Damn.