“In the shallow waters of the Atlantic all the way from the chilly reaches of Prince Edward Sound to the ever-warm Florida shores, the silverside was then, and is now, an ecologically important baitfish. It spends the majority of its life tight to the coastline or swimming the rich tidal estuaries. Here, where land and sea meet, the silverside is one of the most numerous inhabitants. Given this abundance, you can bet Mother Nature has placed it high on the menu of many fine gamefish. Stripers, bluefish, bonito, weakfish, and false albacore all hunt and consume this shiny fish—and all coastal fly-rodders would do well to be so informed.” 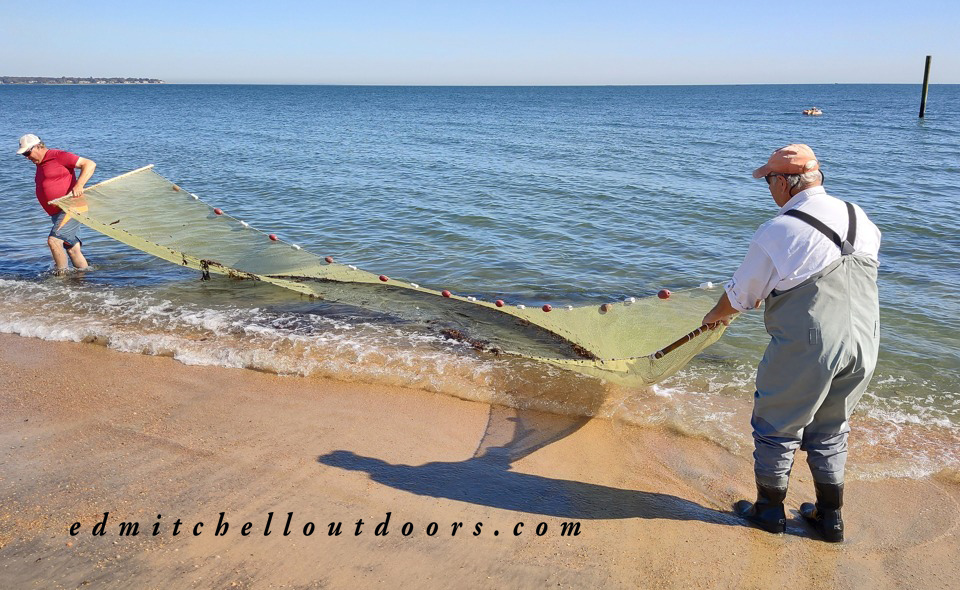 Pulling a Net of Silversides

Those are the opening sentences to an article I wrote on silversides for Fly Fishing Quarterly way back in the summer of 1992. Today, some thirty years later, they still ring true. The Atlantic silverside, Menidia media, is an essential forage fish. And thankfully, it is easy to match with a fly. Typically silversides range in size from two inches to about five. They are a bit translucent, with a tannish, pale olive coloration and a large eye. But the most prominent feature is a distinctive silver lateral line, extending from just behind the pectoral fin to the tail. And it is this that any fly pattern should not fail to mimic. 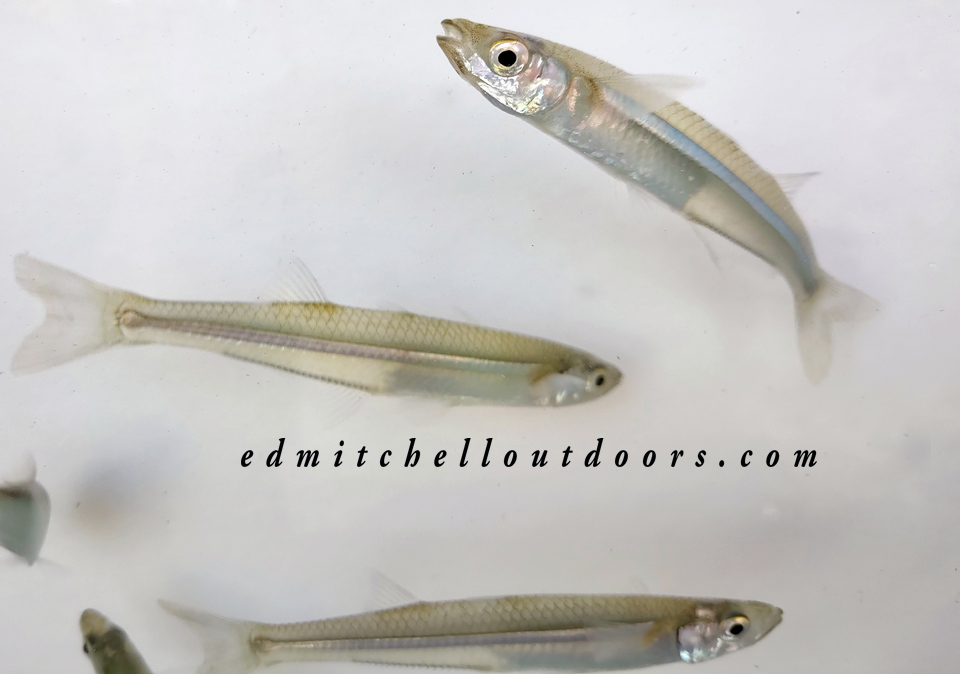 The earliest known silverside imitation is Harold Gibbs Striper Bucktail, created around World War II. Standard saltwater flies such as Lefty’s Deceivers and Bob Clousers’ Deep Minnow are easily adapted, and today epoxy and UV acrylic flies like Bob Popovic’s Surf Candy are in wide spread use. (Be aware that in some places the silverside is called a spearing. You may even hear it referred to as a – glass minnow, rain bait, or white bait.)

Did a Podcast for Saltwater Edge

Did a Podcast for Saltwater Edge

A few weeks back, I had fun doing a podcast for Peter Jenkins over at Saltwater Edge. As you can imagine it covers a lot of information about fly fishing in salt water here in the Northeast. Here’s a link to the podcast: https://saltwateredge.com/blogs/saltwater-edge/a-student-of-the-saltwater-fly-rod-ed-mitchell

Posted in Fly Fishing in Salt Water | Leave a comment

Lucky me. Caught a day fishing Watch Hill, Rhode Island. Watch Hill’s rips and reefs are justly famous for their fishing. Striped bass, Bluefish, Atlantic Bonito and False Albacore all appear here in season.  My baptism on these water began some thirty years ago. And resulted in one of my earliest articles, a story entitled Speedsters on a Fly for Saltwater Sportsman Magazine back in 1992. 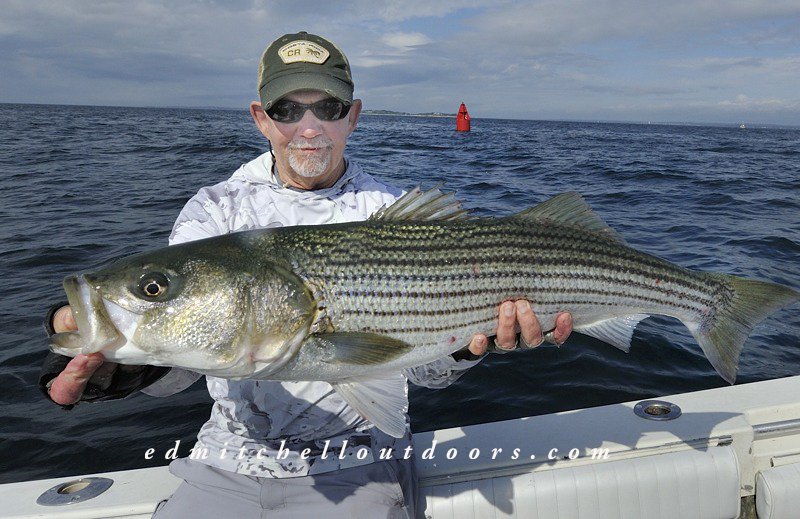 On this recent visit, I was aboard The Lauren B. with Captain Steve Burnett. Steve is a widely known and highly respected fly & light tackle guide hailing out of Stonington, Connecticut. He has decades of experience here and it shows. So if you’re jonesing for a day at Watch Hill, give Steve a call.

Posted in Fly Fishing in Salt Water | Leave a comment

Recently a hammerhead shark put in quite show on Nantucket. While not unheard of, hammerheads sharks are rare on Nantucket Island. Their normal range is in Tropical waters, from 37 degrees south to 40 degree north. Nantucket Island is 41 degrees north. Another sign of global warming you say? Perhaps.

Hammerheads sharks are not extremely aggressive toward humans, but fatalities have occurred. Around the same time this hammerhead paid a visit to Nantucket Island, three big sharks were spotted on Martha’s Vineyard’s South Beach. With the waters warm, this is the height of the shark season in New England. Anglers, swimmers, kayakers, and surfers take care.

My son organized a Father’s Day camping trip to Martha’s Vineyard. We had a blast although the fishing and the weather were not in our favor. 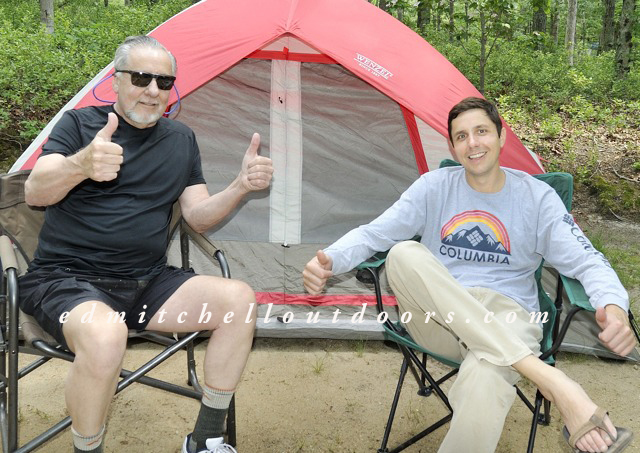 After being home bound much of this spring with foot injuries, I was pumped to be out and about, especially to be on the island with a fly rod in hand. Yeah we did find a few schoolies mixed in with a lot of hickory shad, but the angling from shore was largely a bust. Drat. Perhaps most of the stripers were offshore feeding on the squid runs. If so, you can be sure the boat guys were hooking up big time. 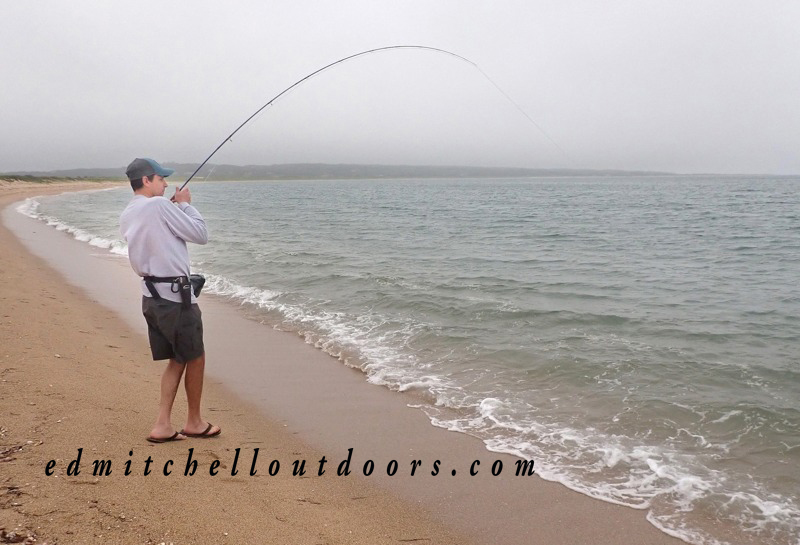 The weather was a factor too. Cold fronts kept rolling through, driven by north winds that weeded up the beaches. Ugh.  I hate that red mung. And rain showed up at times as well. Never good news on a camping trip, believe me. The picture above should give you some idea of what daytime conditions were like. 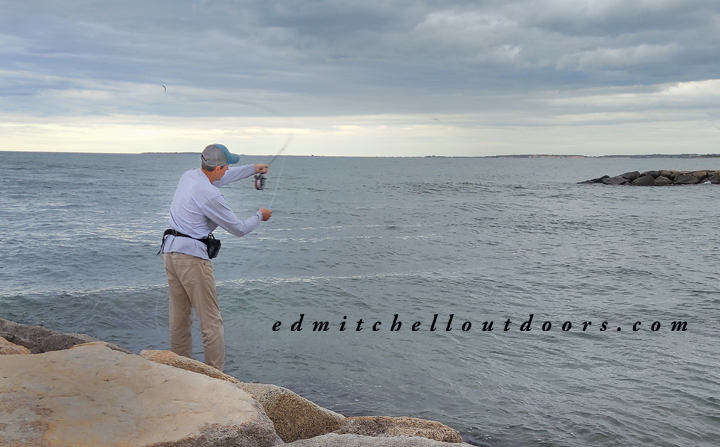 We traveled around mightily, hoping to comp upon a good bite. Fished over half-a-dozen different beaches spanning nearly the entire north shore – from Dogbar to Edgartown. Never saw any real action. Hey, sometimes fishing is wishing!