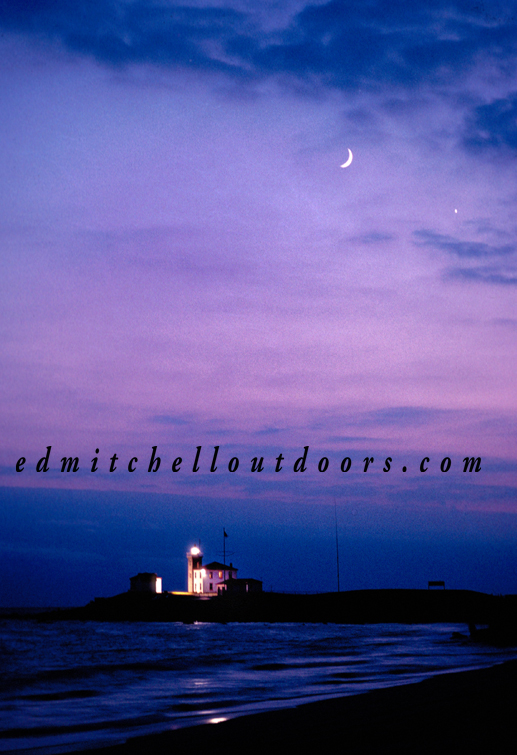 Okay, here’s a few to chew on. With one exception, they are all in PDF format. Nearly everyone has the free Adobe Acrobat Reader DC on their computer, but if you wish to read them on your cellphone you must install a PDF app. They are free too and available for both Apple and Android phones.

Dogfish Dreams: Martha’s Vineyard Magazine This is a story about a solo night on Dogfish Bar. The rest of the crew had gone home; while I elected to hangout on island for a few more days.  This article appeared in  May/June 2022 issue of the magazine.

Abbie Schuster:  Martha’s Vineyard Magazine Abbie Schuster is a respected fly-fishing guide on the Vineyard. This article highlights her angling life on the water. It appeared in the September/October 2021 issue of the magazine.

Solstice at the Light: Martha’s Vineyard  Magazine Years back,  I spent a night in a Martha’s Vineyard’s lighthouse during a wild northeaster. Rain, wind the works. That in itself was an trip, believe me, and get this – I ended there totally by accident. It’s an evening I’ll never forgotten. This article appeared in the May 2019 issue of Martha’s Vineyard Magazine.

Is Euro-nymphing Legal:  Fly Fisherman Magazine – is euro-nymphing legal in a fly fishing only area? Good question. Maybe, maybe not. I wrote this article few years back to explore this very issue. It actually depends on how a state defines fly-fishing. Read on to find out. The story ran in Fly Fisherman’s October 2017 Gear Guide. It is entitled Fly Fishing Outlaws.

Trouble on the Moon: American Angler Magazine – More than a few tides ago, my friend Phil on I occasionally fished on the moon. You heard me right – the moon. Or at least that is how the spot was known, and with good reason. This shoreline is no Disneyland. Hell, some folks didn’t wander in there even in the light, never mind on foggy nights. No this is a stretch of wild Atlantic coast, boulder strewn and backed by escarpments. The story saw light in the Waterline section of American Angler in July/ August 2018.

The Land of Milk & Honey: Fly Fisherman Magazine – Sometimes crazy little things happen while you’re fishing – things you never seem to forget. This story is about one of those events. It happened to me  mondo moons ago in northern most New Hampshire. I remember it as if it were yesterday. This piece appeared in Fly Fisherman’s Gear Guide 2014. It’s another Seasonable Angler “back page” piece. Art Hassall’s wonderful artwork rounds things out.

The Reds are on a Roll: American Angler Magazine -Redfish are one of the most sought after fish along the southern coast. Powerful and yet wary at times, they can be down-right challenging to catch. But come October, the “reds” shift gears, pulling out all the stops. This article focus on that exciting time of year. It appeared in the Waterline section of American Angler, during March of 2016.

Old Yellow Eyes: Fly Fisherman Magazine – If you have ever tangled with bluefish, I’m sure they earned your respect. Wicked strong, with razor sharp teeth, bluefish are in a class by themselves. This piece looks their hell-bent-for-leather, never-say-die personality. The story saw daylight in 2015 in the Seasonable Angler section of Fly Fisherman magazine.

The Aquinnah Rod Company: Fly Fisherman Magazine – I have many wonderful memories of fishing Martha’s Vineyard for striped bass. Man those were beautiful times. This humorous story is based on one of my experiences. I wrote it in 2011 for the Seasonable Angler section of Fly Fisherman. The illustration were done by Al Hassall, a fine artist and a great guy.

Lucky with Landlocks: Fly Fisherman Magazine – I love fly fishing for landlocks in northern rivers. Yes, they can be tricky critters at times. But with the autumn Great North Woods wrapped around you, you can’t lose.  This piece appeared the Aug/Sept 2012 issue of Fly Fisherman in their Seasonable Angler section. This pdf file shows the pages in reverse order. And once again Al Hassall’s artwork graces the pages.

The Splendid Splinter: Fly Fishing in Salt Waters Magazine -Ted Williams was likely the best hitter baseball has ever seen. Amigo, he could find the ball. Even at 38 years of age he slammed .388. Ted was also one hell of a fly fisherman. You name it Atlantic salmon,tarpon, bonefish, Ted had an edge. My article about The Splinter hit the newsstands in the 2010 Nov/Dec issue of Fly Fishing in Salt Waters.

Homer Rhode Jr.  Fly Fishing in Salt Water Magazine  – One of the most intriguing figures in the early days of fly-fishing in salt water was a 6-foot-5-inch giant who wandered the wilds of the Florida Everglades — often at night and alone. Introverted by nature, he lived a life deeply immersed in the natural world. He loved the creatures of the Glades and knew where they lived, how they conducted their lives and even their Latin names. He could catch the fattest snook with a fly rod or the biggest rattlesnake with his hands. The backcountry was his home. His story appeared in the 2011 Nov/Dec issue of Fly Fishing in Salt Waters

Nelson Bryant : Fly Fishing in Salt Waters Magazine – Between 1967 and 2005, Nelson Bryant wrote an outdoor column for the New York Times. Sad to see them end. I used to look forward to reading those all-to-brief gems. Back several years ago, I got a chance to interview Nelson in his Martha’s Vineyard home. It was a fun trip. The resulting piece appeared in the June /August 2008 issue of  Fly Fishing in Salt Waters.

Harold Gibbs 1886-1970:  Fly Fishing in Salt Waters Magazine – One of the most important figures in the early history of saltwater fly fishing was a Rhode Island angler by the name of Harold Gibbs. Besides being a fly angler, Harold was an artist, a conservationist, a hunter, a waterman and a father.  Yes, Gibbs was the real deal. A man of many skills. I had great fun researching this story. It got ink in the May/ June 2007 issue of Fly Fishing in Salt Waters.

Cane on the Coast: Fly Fishing in Salt Waters Magazine – Today, saltwater fly rods are either carbon fiber or boron. And they are no doubt the best fly rods to ever fling a fly line. Before they showed up, we had fiberglass rod; I still have a few. And before “glass” we had bamboo. This story looks back at those early cane rods. The article appeared in the 2009 September /October issue of Fly Fishing in Salt Waters

Midnight in Menemsha: God I love the Vineyard. Miss it too. This true story showed up in Yale University’s  Angler’s Journal, 2007, Volume IX, Number 2 . The file is formatted in MSword

The Ethereal Bonito:   Saltwater Fly Fishing Magazine– Bonito means beautiful in Spanish, and Atlantic bonito are certainly that. Here in New England, they’re also one of the hardest fish to find, hook and hold. Yeah, bonito are a challenge. In this article, I give anglers an idea of what they can expect from this wily green rocket. Saltwater Fly Fishing printed this story in August/September of 2003.

Amazing Albies: Saltwater Fly Fishing Magazine – The false albacore, or little tunny if you like, is a fascinating the fish. Like its cousin the Atlantic bonito, it visits New England water often in summer, causing fly rodders to jump for joy. This article offers an indepth look at what to expect from these supercharged members of the tuna tribe. It was put in print by Saltwater Fly Fishing back in September of 2002.

Big Bass from the Beach: Saltwater Fly Fishing Magazine – In New England, catching a really big striped bass in the surf is one of the most exciting things you can do. But unless you’re plain lucky, the odds are stacked against you. This article explains how to narrow those odds. Lotsa solid information here. And know this: more than one angler has used this article to land their dream bass. Published in Saltwater Fly Fishing, October/November 2000

Striped Bass: Past, Present & Future. This article appeared in Fly Fishing in Salt Waters, in the Aug /Sept 1994 issue. It is my reaction to the reopening of the striped bass fishery by the ASFMC. http://www.edmitchelloutdoors/Archives/Stripers%20past%20present%20future%201994.pdf

Salty Six:  Saltwater Fly Fishing Magazine – Saltwater fly fishing always requires a big, heavy fly rod. Right? Wrong. There are plenty of situations where a lighter rod will not only get the job done, but be a barrel of fun! This article looks at 6-weight rods and where they shine. It hit the street in the 2005 Feb/March issue of Saltwater Fly Fishing.

Retro Rod:  Saltwater Fly Fishing Magazine – After 50 years in the sport, I still own, and on occasion use, fiberglass rods. Yes, graphite is great, love them carbon rods, but glass has its place. In fact, for sweet water applications, they are all I use. I call them my “Blue Collar Bamboo“. I did this piece, years ago, in an attempt to point out the virtues of glass rods. And I like to think it played a role in the resurgence fiberglass enjoys today. It appeared in the 1998, June/July issue of Saltwater Fly Fishing.  The file is formatted in MsWord.

Sand eels:  Fly Fisherman Magazine –  Here’s the first article I ever sold. The year was 1988,  and the magazine was Fly Fisherman. Obviously the subject is sand eels, one of the the most import forage fish along the Atlantic coast. I believe this piece to be the first fly-fishing article to address the life cycle of a marine bait fish. Hey it was needed. Understanding sand eel is just as import to the coastal angler as understanding may flies is for the trout guy. The flies in the article are very dated but the information is still solid.