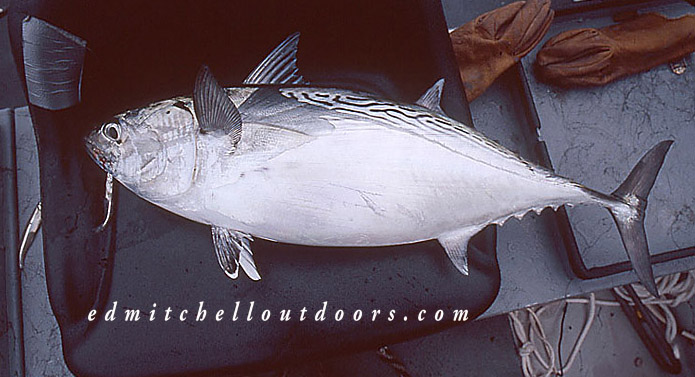 “Albie” from a Driftboat

When fly anglers talk about the strongest fish pound-for-pound, you’ll hear alot of different opinions. Some say its this species; some claim its that. But if you’re talking Northeast saltwater fish, the answer is pretty clear. Its the Euthynnus alletteratus– the little tunny, also called the false albacore, or “albie”.

Its found both in green and bluewaters, usually appearing in summer. The “albie” is a voracious feeder, that attacks in packs, often smashing through schools of bait at flank speed. A 6 pounder is considered small, but still a handful on a fly rod. Anything nearing 10 pounds becomes a slugfest. And anything over 10 becomes a full fledged war.

The biggest challenge for the New England fly rodder is catching an “albie” from shore. Yes, it can be done; it requires a great deal of patience and much planning. Still some “sharpies” do it a dozen, or more, times a year. Things are far easier from a boat. But the good news is you don’t necessarily need a big one. If you can find a protected piece of water where the fish show with some regularity – a canoe, kayak or rowboat will do just fine. I caught the one above from my driftboat.

PS. This “albie” spit up a pile of silversides. You can see two of them in the photo above. One is on the seat next to its mouth. The other one is on the floor to the left.

2 Responses to The False Albacore