Florida. It’s a complex crucible. Acres of anglers bob in boats; conservationists and nature lovers abound; born and bred Floridians rubbing up against the uber northern rich; outdoorsmen who can skin a rabbit with their teeth; bible thumpers and con men; glitz, glamor and abject poverty; southern hospitality at nearly every turn, while in the backcountry, pistol packing rednecks push personal liberties to the horizon; the artless and the artful; soaring high-rise towers standing by the sea as nearby trailer homes sear in the sun; endless dumb-ass strip malls and oodles of wildlife-much of it with razor sharp teeth; the weak,the strong, the old and the young.  Ahhh America.

Seen some pretty places, Sanibel for one. Its a twelve miles long barrier beach backed by an estuary; a fly rodder ‘s dream. Charlotte Harbor is very nice too. Hooked many species including Spotted seatrout, Redfish, Ladyfish, Snook, and Spanish mackerel.  Aboard Ron Whitely’s flats boat ( an old friend from Connecticut) we went into the harbor’s maze of mangroves; where I landed a 40 pound tarpon on an 8-weight.  What a blast, amigo. 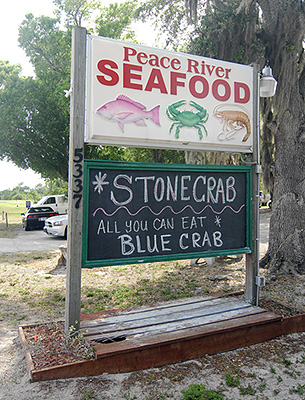 A local lady turned me on to some nice places inland as well, including the small town of Arcadia, Myakka State Park, and the upper Peace River. And she also showed where the rednecks chow down. Man the food was good!  Loved it. Ice cold beer with fresh fish, shrimp, crabs, chowders served in a funky, down-home atmosphere, with geese, goats, and maybe a gator in the yard. So far it has been an amazing adventure!

This entry was posted in Environment, Fly Fishing in Salt Water, On the Road. Bookmark the permalink.