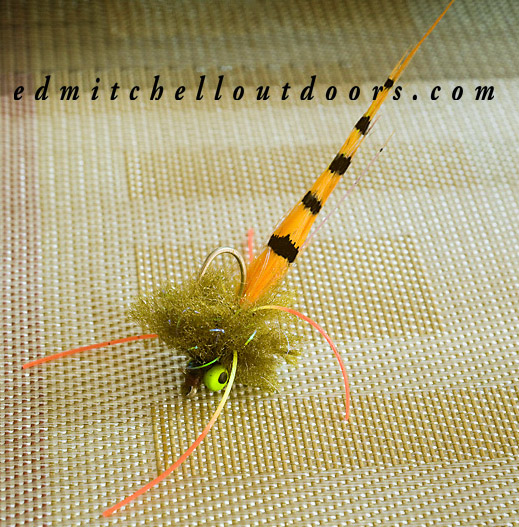 In the last post I showed you a fly called the PG Pup. Essentially it is a Kwan with rubber legs. Why legs? I wanted to give the fly more action. Unfortunately the same frustrating problem seemed to exist.  I was casting at tailing fish, but getting too few responses.  The reds either didn’t love the fly or – far more likely- with their heads buried in the eelgrass they never even noticed it gliding quietly by. Damn.

Time to kick things up a notch. Clearly I needed a fly that landed in a way that didn’t spook fish, but somehow quickly made its presence know.  Ummmm. I opted to try a bigger, bulkier fly; one that pushed water, making it both easier to find, and harder to ignore. So I wrap the body with a fairly new material called “Fur Body”. It instantly produced a chunky waistline; Pig & Jig style. The fly still landed with a nice soft splat. Yet upon retrieve it moved tons of water. And looks like a meaty mouthful. Nice.

Did it work? First time out, sans dumbbells eyes, it hooked three tailing reds right off the bat. Man, I was impressed. Released them all.  So is this the perfect tailing red fly? Naaa, still it is a step forward. 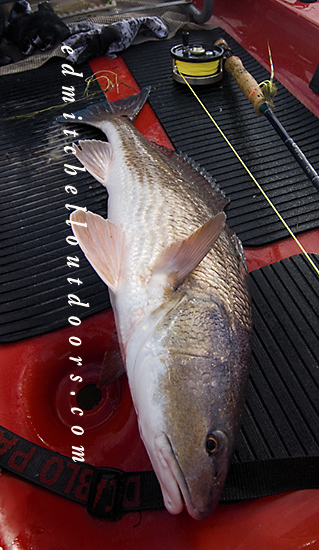 A Tailing Red for Christmas

PS. If you prefer, Fur Body can be quickly trimmed down into a neater shape. To date, I am using it full dressed, not only to push water, but because it acts as a De Facto weed guard.

This entry was posted in Flies and Fly Tying, Fly Fishing in Salt Water, Tailing Redfish. Bookmark the permalink.