Early this morning it rained hard. Around 11 AM, however, it eased up a bit. So I walked over to the kitched window to see if I could get out for a bike ride. As I looked a large bird landed in a tree across the parking lot. From the size of its broad wings, I assumed it was big hawk.  Florida is home to the largest variety of birds I have ever seen. They come in all sizes, shapes and colors, from majestic bald eagles, to frigates and swallow-tail kites, to roseate spoonbills and pelicans, to woodpeckers on down.

The rain had reduced  to a light drizzle, so I decided to go see the buteo. As I crossed the parking lot, I noted there were actually three of them in the same tree. Highly unusual. One of them spooked immediately, and as it took off, I discovered it wasn’t a hawk at all; it was a barred owl.  The remaining two were as well.  Now in New England I never came across barred owls in a group. And I rarely saw them in broad daylight. Barred owls are noctural by nature. Moreover, it was uncommon up north to hear them call except in low light. But down here they call all day long. “Whooo-cooks-for-you” 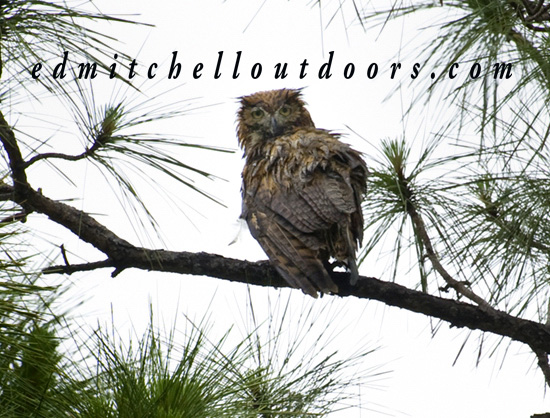 By the time I got my camera, all three had flown off, although I saw one land in a tree about 125 yards away.  Then the damn heavens opened up and it poured buckets. About an hour later, the rain subsided again. So with camera in hand, I ventured outside. Sure enough my owl was still in the same spot. I snuck up like Tonto. As I neared, I noticed his two buddies were there too; both partially hidden. My target owl was in the open. But unfortunately it had its back to me. Then I got real lucky.  I tripped the shutter, and the bird must of heard it, because it instantly turned and looked right at me. The next “click” scored. Got my picture that time.

Barred owls are sometimes called Rain Owls. Now I finally know why. They seem to like rainy, overcast days. Or at least these three do….

This entry was posted in Looking Upward, Wild Things. Bookmark the permalink.