Foggy Morning Redfish  Awhile ago I did a post about foggy morning redfish. Couple a foggy morning with a strong low tide and you have a good shot at seeing “tailing” redfish. Of course you still need calm winds and no boat traffic. (I wrote a post on that as well.) And it never hurts to have an approaching cold front too. Regardless of the type of fishing you’re doing, a coming front often spurs up the bite.

Well, yesterday morning I had good conditions for “tailers”. A strong low tide at 7:30AM, fog, quiet boating conditions, and a front arriving in the afternoon. Great! I was pumped. 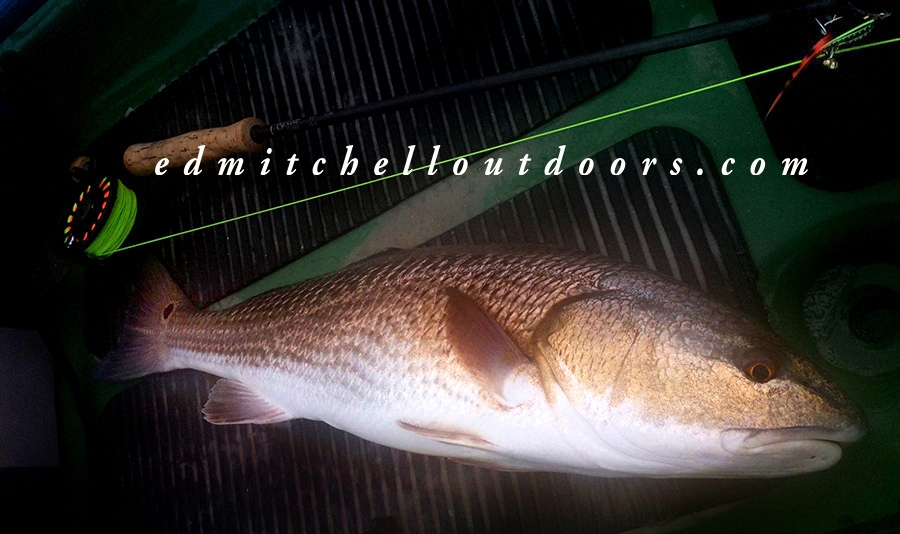 Was everything perfect? Not quite. At the ramp I felt a touch of wind from the southwest. Damn, it wasn’t dead calm. Ummmm, usually foggy morning are? And that’s an odd wind direction for this time of year, most likely the precursor to the nearing front. But would it ruin the fishing? Only one way to find out.

With high hopes, I set out in the Adios around 7AM. Once on the flats, I slipped off, staked out, and slowly waded around. An hour later, no “tails”, not a one. Zip, zero. zilch. Disappointed I was. Man. Back on the Adio, I began poling away to the north. That’s when I encountered reds. No they weren’t “tailing”. They were sitting in sand holes on the flat. Good fish too!

I got off the Adios again, staked out, and began blind casting into the sand holes. Bingo, three casts later came a jolting strike. Wow, a foggy morning redfish.  (See it in the photo above, a 7-pound red on my 6-weight.) Very cool. Apparently the conditions had brought reds onto the flats, but the wind had stopped them from “tailing”. Don’t believe me? That’s my opinion friends and I’m sticking to it.