Towing a Kayak with a Bike 2: A good time back I did a post on towing a kayak with a bike. Its been a popular post. And I understand why.  While some paddlers wouldn’t dare launch without an electric motor, a GPS, a Fish Finder, a Depth Finder, a Live well, a solar powered cell phone charger, and a microwave – most kayakers prefer to keep things simple. So using a bike to haul a yak is an appealing idea. Pedal power and paddle power are birds of a feather. Right? I think so. 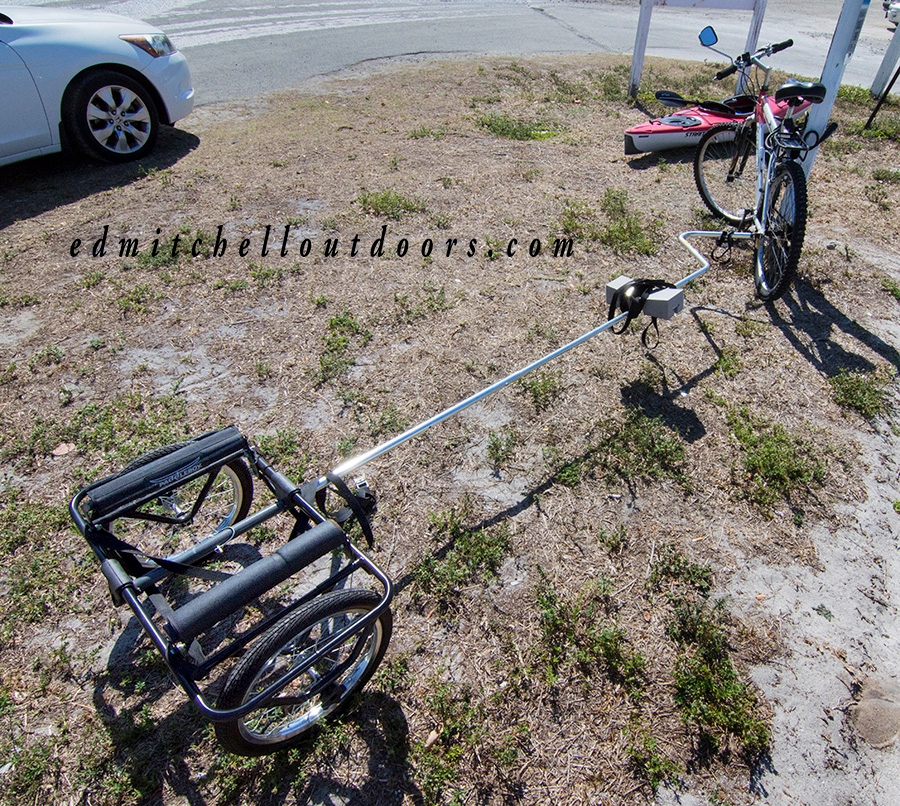 The first rig I showed you was indeed a simple tow device, straight forward and to the point. In fact, with a little ingenuity anyone could slap together something similar, although commercial versions exist.  (Wicycle’s “Smart Stick” Towing Assemble is one) Yesterday, however, I saw a more elaborate deal.  It is obviously store bought. (Seattle Sports Paddle Boy Go Cart?) Larger and more stable looking than the first rig, this type of tow device appears to be a better long distance tool. That said, upon inspection I was not impressed with the quality of this particular unit. But hey, hopefully that kept the price down.

The trailer’s tongue attaches to the bike’s rear axle. (see red arrow in the above pic)  Does this affect the bike’s steering? Damned if I know, but at the very least it must take some getting used to because the kayak isn’t traveling directly behind you. I bet that’s why the bike above has a rear view mirror on the handlebar. You’ll need to watch where the yak is going, especially when you turn hard to the right. LOL

This entry was posted in Gear, Kayak / SUP Fishing. Bookmark the permalink.

1 Response to Towing a Kayak with a Bike 2