Its Chernobyl Ant Time! :  Ahhh…summer is finally here in full force; yeah the heat is on. That means cold beer in your cooler and terrestrial flies in your vest. Yes, hoppers, beetles, cricket, and caterpillar imitations are a must have during the dog days. And of course you’ll need ants as well – red ones, black ones, flying ants, cinnamon ants, and oh the deadly Chernobyl ant too. 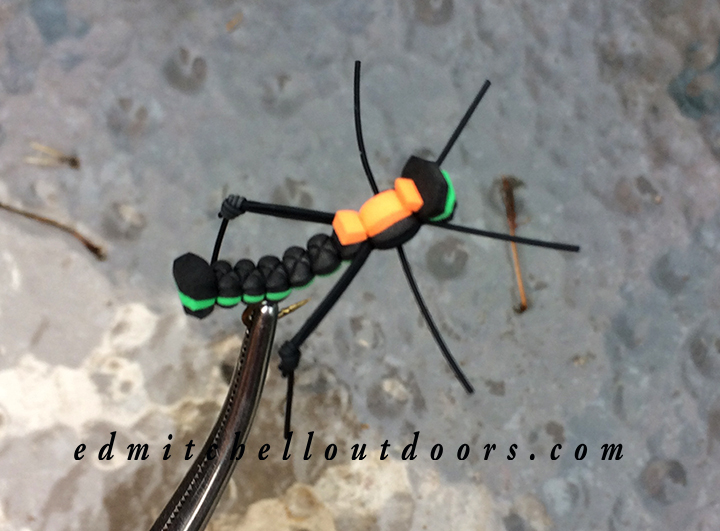 I first learned about the Chernobyl over ten years ago, while scrounging through the fly bins in a fly shop long since gone. There they were – big, butt ugly, no holds barred, crazy creations. Picking one up, I took it over to Dave Goulet, the shop owner, and asked whether this weird whatchamcallit actually worked. Busy behind his desk, Dave looked up, extracted a cigarette from his mouth, launched a shit-eating grin, and a big thumbs up.

When Dave tells you a fly is good, you best listen. He was a commercial fly tyer extraordinaire. Legend has it, back then, well over a million flies had already emerged from his vise. So based on his stamp of approval, I bought several Chernobyl ants on the spot. And that day they proved to be astoundingly good. No doubt in my mind, Chernobyl ants are killers, bringing up trout when nothing short of dynamite would.

As the story goes, Mark Forsland, a guide on Utah’s Green River, invented the fly in the early 1990’s. Originally he tied it with foam and black hackle, calling it the “Black Mamba”. It worked like magic. Then along came Allan Woolley, also a guide, who stepped in and substituted rubber legs for the hackle. Bingo, the Chernobyl took on its present day look.

Chernobyls are pretty much fool proof, but here are a few tips. Chernobyls may spin during the cast so I suggest a heavier tippet to reduce twists. Next, soft landings are not required. Don’t be afraid to plop these babies down on the water, especially under overhanging brushes and limbs. The “splat” brings trout running. Lastly, Chernobyls are a good choice for “hopper-dropper” rigs. Good luck on the water!