The San Juan Worm: The San Juan Worm may qualify as the Rodney Dangerfield of the fly world. Believe me, its gives some serious anglers the heebie-jeebies. They love to hate it. Wouldn’t be caught dead with one in their fly box. To them it’s pure bush league, something only a greenhorn would tie to a tippet. Wow, are they ever wrong!

The San Juan Worm came to my attention back in the 1980’s while fishing- you guessed it – the San Juan River in northern New Mexico. My guide showed me the fly but wasn’t crazy about using it. He felt nymphs were a more “respectable” choice. (even back then this fly was getting prejudicial treatment) Nonetheless I asked him if the San Juan Worm actually imitated something that lived in the river. He said it did and after a little digging around pull a small reddish worm off the bottom. So there it was – solid proof. The San Juan Worm wasn’t just some off-the-wall attractor pattern. It matched the hatch. 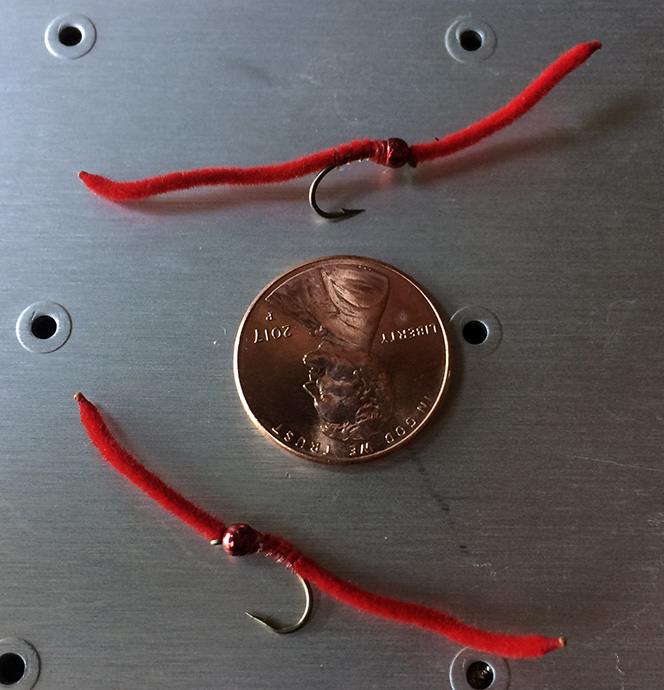 I left New Mexico wondering if that aquatic worm was unique to the San Juan. Well a few years later I discovered it was not. This time I was in northern New Hampshire. Where the lodge I was staying at had the San Juan Worm on their list of favorite flies. Really? Naturally I had to ask. “Are there aquatic worms in this river too?”  The answer was yes. And boy did the San Juan Worm work on that trip.

Since then I’ve learned that aquatic worms are found in just about all rivers. The science literature says they live on muddy bottoms, but in my experience they are just as often associated with algae covered rocks, the kind you see in shallow riffles. But wherever you encounter them, the San Juan Worm is a very good fly. Thinking I’m kidding?  In 2005 it won the “One Fly Tournament” in Jackson Hole, Wyoming. 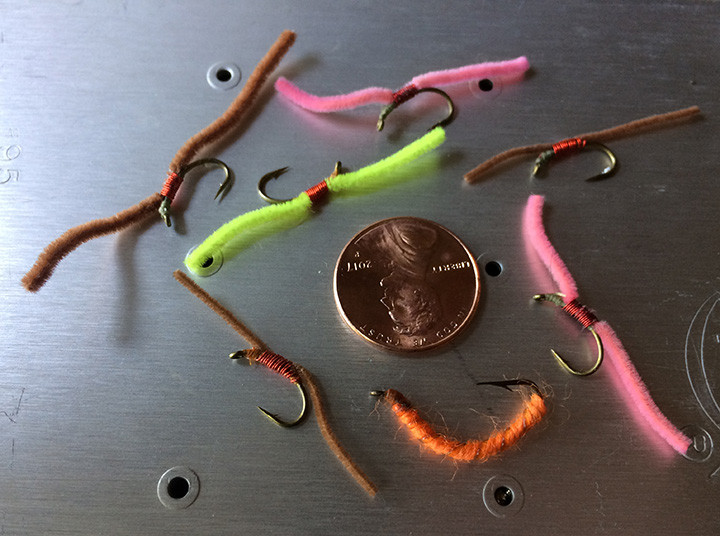 Tying the San Juan Worm is a snap. Typically all it involves is lashing a piece of red Ultra-chenille (or Vernille) to a size 10 scud hook . Thread works, of course,  and I like to add a ribbing of copper wire. (I have seen some tied on longer curved shanks,but they don’t seem to work very well.)  Now other colors catch fish too, and in some situations they’re even better than red. I’ve used pink, brown, white and even chartreuse. If you fish fast or deep water, consider covering the hook shank first with lead wire. More recently I’ve seen a few San Juan Worms tied with a brass bead to help them sink. Give the San Juan Worm a try!

This entry was posted in Firewater, Flies and Fly Tying, Fly Fishing in Freshwater. Bookmark the permalink.