Edward Abbey – A Man Who Loved the Earth

Edward Abbey – A Man Who Loved the Earth

Almost thirty years ago, on a March morning in Tucson Arizona, four men placed a corpse into a blue sleeping bag, and loaded it into a Chevy pickup. With the precious cargo secured, they rode off into the remotest deserts of the American Southwest. Terra Incognito. Their mission you ask? To bury their dear friend Ed Abbey, as he had wished – in secret and alone. 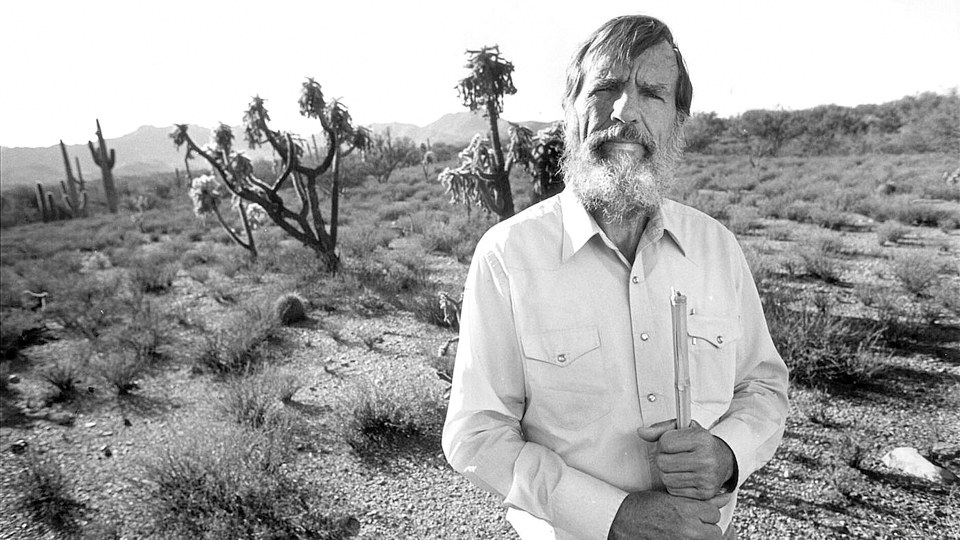 Ed Abbey was untameable. Throughout his life he stood defiant in the face of authority, while raising a middle finger to the modern world. At times amicable even shy, at times difficult and daunting, his life was aswirl in contradiction. Love him or hate him, there is no denying Abbey was a brilliant writer, and a sharp witted, hard drinking, devoted environmentalist who hated seeing the beauty of the American West exploited and torn apart by commercial interests. So strong was his belief in the sanctity of the land, that for those who love wilderness Ed lives on as a legend. His book The Monkey Wrench Gang became the bible for an entire new breed of environmental activists. And would by most people’s account spawn the organization Earth First.

I learned of Abbey from his book Desert Solitaire – A Season in the Wilderness. Written while he was a park ranger at Arches National Monument, it now ranks as an American classic. On each page his voice rings strong, and clear, with an aesthetic sensitivity to the earth that borders on the mystical. Allow me to give you a quote.

“Suddenly it comes, the flaming globe, blazing on the pinnacles and minarets and balanced rocks, on canyon walls and though the windows in the sandstone fins. We greet each other, sun and I across the black void of ninety-three million miles.”

Printed originally in 1968, the book’s cultural value remains relevant even today. In January of 2018, the New York Time ran a piece entitled. “President Trump, Please Read Desert Solitaire”  (You may encounter a few annoying pop-ups) The article is an excellent example of why Abbey’s words, and Abbey’s vision still hold meaning, a half-century later.

Over the years I have read and enjoyed nearly all Abbey rode. If you would like a good cross-section of his work, you will find it in The Serpents of Paradise published by Henry Holt. More recently I took pleasure in Finding Abbey, by Sean Prentiss, published by the University of New Mexico Press. It is the author’s personal search across America for both Abbey’s spirit and his grave. A good read.