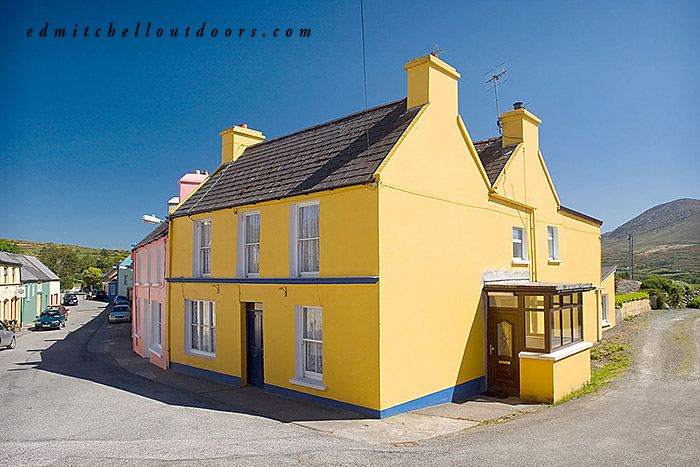 Eyeries is a gem-like village on Ireland’s Beara peninsula. Nestled between Coulagh Bay to the north and a string of mountains to the south, Eyeries’ brightly colored homes offer a festive and infectious optimism. Hey, it’s fun just to walk down the street; I really liked this place.

If you ever get to Eyeries, and I hope you do, I suggest you look for a big rock about 2 miles outside of town. Yes, that’s right, a rock. Located near Ballycrovane Harbor, it sits on a hillside, with a fine view of the sea. This black & white boulder is said to be the petrified remains of Cailleach Bheara, the fabled Hag of Beara. The Hag is the most important goddess of pre-Celtic times, and perhaps Ireland’s oldest mythological being. She is believed to have roamed the Beara and beyond, and to have been older than time itself. 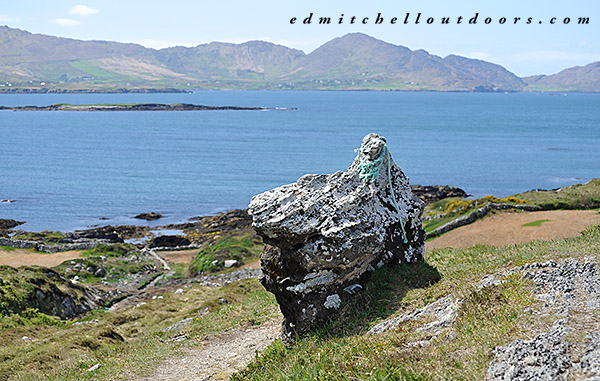 Cailleach Bheara – The Hag of Beara

She was a healer, a goddess of fertility, and had many husbands and many children. So how did The Hag end up a here? According to legend, she stole the prayer book of a Christian saint, who in retribution turned her into stone. Tough on the old girl. Ever since The Hag has remained perched here overlooking the endless tides. But hey, she still has many friends. People come and cover the stone with offerings -coins and trinkets adorned the rock – all in the hope that The Hag will grant a wish. Maybe she will…..