How to Free Up a Stuck Fly Rod Ferrule

Sooner or later you’ll have a fly rod ferrule that refuses to come apart. Here’s a neat little trick that usually saves the day. I say usually because it isn’t 100 percent effective. More on that later. You’ll need a piece of aluminum foil; I used discarded scrap. And you’ll need a handful of ice cubes. 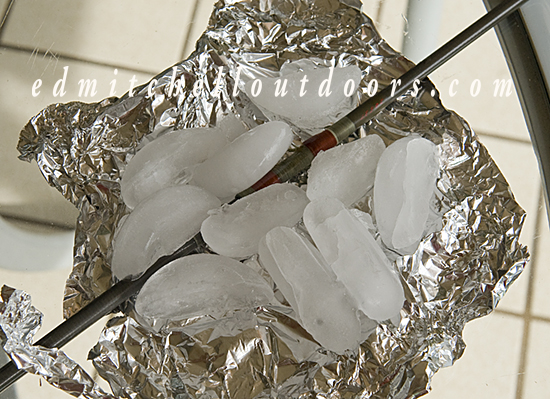 Freeing up a Stuck Ferrule with Ice

Place the ferrule on a table. Slide the foil underneath the rod. Load up the foil with ice cubes. Be sure to place some ice under the ferrule as well on top. Roll the foil up like a football, so the ice is tight to the rod. Wait at least four minutes. Open the foil. Now try pulling the ferrule apart. It should come. If not, try the ice again for a longer period. No foil? A towel might work just as well.

Freeing up a Stuck Ferrule with Ice

Now early on I said this trick works most of the time, but not always. Often this is the case with a rod left assembled for an entire season. Worst yet, an assembled rod that was left in a boat rod rack for an extended period or outside in a garage. At this point the ferrule can seem welded. Damn harder to take apart.

To undo this baby you’ll need a second person. The procedure can be seen on the web. The two of you stand facing each other on a 45 degree angle. With the ferrule between you, each of you will place a hand on both sides of the ferrule. Your arms will appear crossed at this juncture. Together both of you then slow apply pressure pulling the ferrule apart using all four hands. There is a decent chance this will save the day. There is also a chance the rod you may damage the rod. Do not bend the rod during this process! Pull straight apart. Good luck.