A couple days ago, I  was poling down the flat when I ran into Dave. Dave is considered by many to be one of – if not the best – local fly fisherman. I’ve been fishing here about 18 months; Dave has been fishing these waters about 30 years! So I have a lot to learn from Dave. And he has been kind enough to share his knowledge, including a strategy he calls “heave” & “leave”. 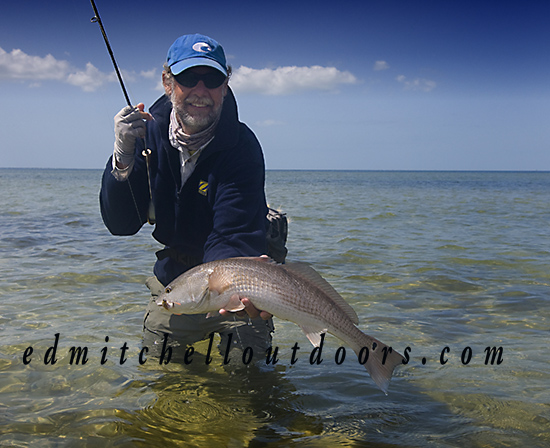 Dave with a “heave” and “leave” redfish

Turned out he had a school of redfish milling around in front of him. They were out a bit, hanging just beyond a dark patch of grass. The fish moved back and forth, but occasionally they came into range. Now common practice is to heave a fly out in front of the school, and let it sink. When the lead fish arrives, you begin a slow retrieve, and hope the fish grabs the fly. But Dave had a different plan.

Dave told me about a tactic he learned from the late Brock Affel (?). After the fly settles, Dave leaves it on the bottom, allowing the lead fish to swim by it. Only when the rest of the school reaches the fly does he start a retrieve. This is the “heave” and “leave” strategy.  Sounded like what some guys do just before the bar closes. LOL

So whats the reasoning behind this idea. The lead fish is on high alert for danger, and anything that moves -including your fly- may spook that fish. Which in turn spooks the entire school.  By permitting the lead fish to pass by, you avoid that potential problem. And very often the next few fish to arrive are less wary and more ready to eat. Interesting stuff.