Five years ago I did a piece for Fly Fishing in Salt Waters magazine, entitled Cane on the Coast. (A copy here.)  The article chronicles the early history of bamboo fly rods in the salt, covering from about 1900-1950. Which are the same years saltwater fly-fishing first came to light.

In the story, I highlighted a Heddon Riptide saltwater bamboo fly rod. It  is a 9-foot, 3-piece, 2-tip, cane rod built in the 50’s specifically for the brine.  I found it on consignment in a fly shop in the late 1980’s. The  rod was in perfect condition. I think the asking price was near $200 – half of what a high-end graphite rod cost at that time. It was a deal considering the rod had just been refinished at a cost of $100. Apparently the rod’s owner had prepared the rod for a trip to Anticosti Island, but guides and friend convinced him to swap it for something more modern.  My good luck.

It is a beautiful fly rod. True eye candy. Heddon cane rods do not demand top dollar from collectors, but not one argues the quality of Heddon rods. They were exceptionally well-made. The rod is tempered, which strengthen the strips and gave them a rich, deep color. The fittings are stainless steel or heavy chrome to ward off the ravages of the salt.  A half-wells grip joins a sturdy down-locking reel seat, capable of accepting a butt extension. The extension is quite long, and follows the style favored by salmon anglers in those years. A tag on the rod sock says the rod weighs 5 1/2 ounces without the reel seat. With the seat it likely falls between 6 and 6 1/4 ounces.

Prior to the 1960’s, fly lines were rated using an alphabetical system. The system was not based on line weight, but rather on line diameter, and ran from “A” to “I”.  Since weight and diameter don’t always go hand and hand, translating between the old system and the new is a bit tricky. But we can venture this. An “A” line was approximately equivalent to a today’s 9-weight.  A “B” to an 8-weight line. And a “C” to a 7-weight. So on and so down to “I”. 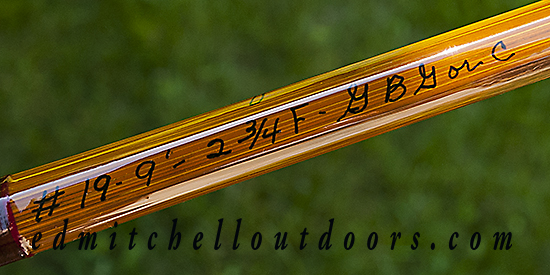 As you can see above, the Riptide was rated for either GBG or C line. Lets call that a double taper 8-weight, or a level 7-weight. I fish it with a modern 8WF. To the left, in the photo  you see that the Riptide was also known as the model 19#. The “9” is for 9-foot. The “2  3/4 F” refers to the size of the butt ferrule, of which was probably the largest Heddon made.

In the process of doing a feature  on Harold Gibbs (copy here),  I went up to Cape Cod and interviewed Al Brewster. He was in his 90’s at the time and still very lucid. Al had a wealth of information on the early days of saltwater fly-fishing along the New England coast.  And he was good friends with Harold Gibbs. (Unfortunately Al has since passed on.) He told me that the Riptide was a respected rod in its day. And that he owned and used one at one time. He told me Montague cane rods were popular too. Gibbs preferred Orvis rods.

The Riptide followed me to Martha’s Vineyard several times. Where it saw occasional light-duty. Outfitted with a Medalist 1498 reel and an 8-weight line, I took it along Lobsterville Beach, and Dogfish Bar, in early evening, casting for striped bass. Big cane rods tend to feel a touch tip heavy, and this rod is no exception. Still it casts well and covers fish out to about seventy-five feet. When twilight arrived, I always returned the Riptide to the car. Swapping it for my trusty Sage RPL+ (here).

Believe me there is a special thrill in using antique tackle. Whether its an old cane rod or  vintage fiberglass, these rods are time machines, transporting you back to the roots of our sport. Try it sometime. I think you’ll enjoy it.