Both vultures thrive on carrion and road kills of all kinds. These feathered scavengers pick the bones clean in a matter of an hour. Amazing to watch. Black vulture can also be aggressive toward living domestic and wild animals, especially newborns. And get this. Black vulture may also attack your parked car, eating the rubber and plastic moldings. Crazy. 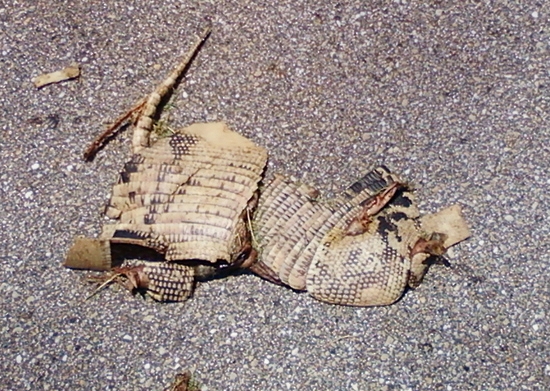 The armadillo’s armor is all that was left behind

A couple of days ago, near my house there was an dead armadillo in the middle of road. Given the current news reports about armadillos possibly carrying leprosy, I wasn’t about to remove it. The vultures left it alone too, which at first surprised me. Then I realized they didn’t want to deal with the armadillo’s bony armor.

Hours later, the armadillo got squashed by a car. Shortly after, three black vultures descended for the feast. Man, they’re fast workers. Soon all the meat was consumed, leaving only the armadillo’s bony armor behind.

How tough is that armor? Recently a guy in Texas went out into his yard, spotted an armadillo and shot it three times with .38 revolver. One round bounced back and hit him in the jaw, requiring a ride to the emergency room. The armadillo has yet to be found.

This entry was posted in Environment, Looking Downward, Looking Upward, On the Road. Bookmark the permalink.