Sturgeon in the Connecticut River

I’ve have the good fortune to fish the Connecticut River from its headwaters near the Canadian line to its mouth on Long Island Sound. Along the way I’ve caught many species, but recently my son did me one better. He caught and released a fish I’ve never have – a sturgeon. 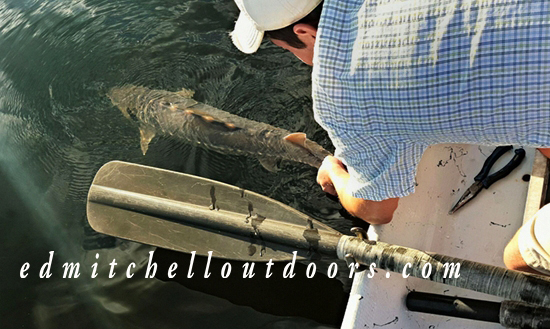 While working a deep channel with a blade bait, he hooked a three-foot sturgeon, one of the most primitive fish on the planet. It fought well on light tackle, and he released it alive back to the river. Please note that all sturgeon in the Connecticut are federally protected, and must be released immediately.

Was this an ultra rare Atlantic Surgeon, Acipenser oxyrinchus, a fish thought to be near extinction? Well, a seven-foot female washed up in the river near Ely Ferry Road in Lyme, last April. So its possible. It caused quite a stir. But given my son’s fish’s size, it was more likely the Atlantic’s smaller and more common cousin, the Short Nose Sturgeon Acipenser brevirostrum.While the Atlantic Surgeon reaches lengths of twelve feet, the Short Nose adult averages about three feet. Both species can live up to 75 years!

This entry was posted in Environment, Wild Things. Bookmark the permalink.

2 Responses to Sturgeon in the Connecticut River