We’re stuck in a weird weather pattern. In fact, the damn weather has been off all year. Right now we have August temperatures in November. That’s crazy sh*t. The only good news is that we are starting to get those winter low tides that lead to “tailing” reds. Locally these tides are called minus tides. And they drain a ton of water off the flats.

This morning conditions were on target for “tailers”. A minus low tide, low light, and low wind. I left the ramp around 6:30AM. But things didn’t start well. Out on the flats I poled the Adios for over 40 minutes without seeing much. As the tide bottomed out, however, I spied a couple of tails. You gotta love it.

Sliding off the Adios, I slowly waded over to get a shot. With low water and calm conditions, you need to make a very delicate presentation. These fish are extremely spooky. Everything has to go just right. A sloppy cast or a fly that lands hard will send the fish tearing out of there. Zooming off the flat. And you have to be accurate too. A fly that lands behind the red or too far away will be ignored. 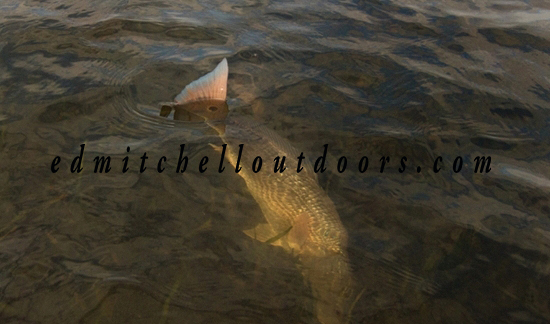 After getting into position, I carefully dropped a shrimp fly on the money, using a six-weight fly rod, and a ten-foot leader tapered to ten-pound test. I let the fly settle for a brief second and then started a slow strip. A moment later, the red nabbed the fly. Felt great, and it fought well. Mission accomplished. After a photo or two, I released it.

Here’s the fly. Its pretty straight forward, and tied on a Mustad C70SD, size 2#. The tail is Craft Fur (Select?). I striped it with a laundry marker. The body is Woolly Chenille. Good stuff. Hidden upfront are a pair of dark brown bead chain eyes. They add a little weight. Yes, you’re right, those are red EP Shrimp Eyes sticking off the bend. Rubber legs, of course, don’t leave home without them.  And last but hardly least, the fly has a weed guard. Weed guards are critically important. Without them your fly will snag in the turtle grass. My weed guards are made from 20 pound, stiff mono. Heavier mono may interfere with your hook set. 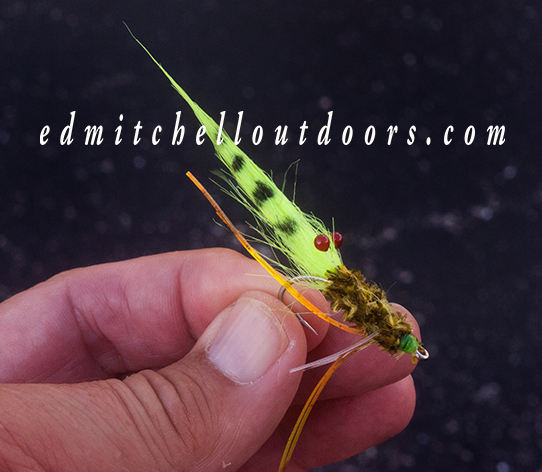 Why so few tailing reds? I’m not sure, but here’s a thought for you. At this time of year, typically the water has cooled down, forcing small baitfish to flee the flats for deeper water. But our above average warm weather is allowing them to remain in good numbers. As a result, the reds still have them in their diet, and therefore aren’t completely left to “tailing” in the grass for shrimps and crabs.