Fishing Far and Fine: At this time of year many New England trout streams are running extremely low and clear. Which is especially true for those with smaller watersheds. As a result the trout fishing is often very challenging. The trout can practically hear you slam the car door. And they certainly can feel your foot steps along the bank and see you towering over the water. Its time to fish-far and fine. 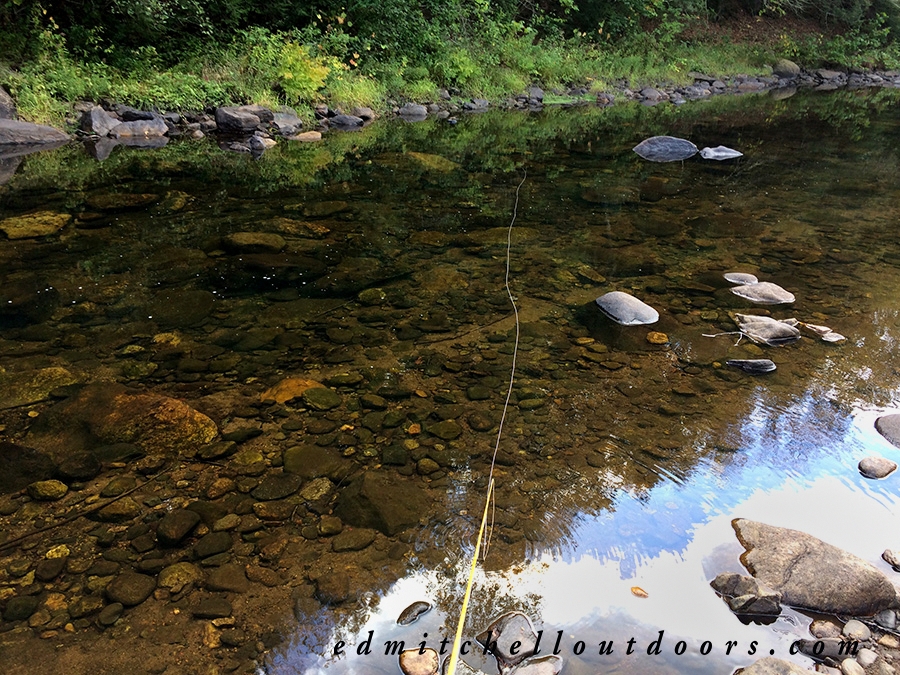 That’s the conditions I found yesterday on a small Connecticut stream. The water was very low, perhaps shin deep at best. And the air was still, making the surface like a sheet of glass. In fact you could see every stone on the bottom. Complicating matters, there was nearly no flow. All in all the angling situation was as tough as it gets.

If I sat quietly on the bank after a few minutes I’d see trout in the pool, but if I stood up and walked they disappeared. Wow. Obviously wading was totally out of the question. Stepping into the stream would scatter the trout to kingdom come. I was going to have to hunch over and do a slow stalk from the stream’s edge.

With my Kabuto 7-foot, 3wt in hand I began the task, armed with a floating line. On the reel was a 9 foot leader tapered to 5x. Quickly I lengthened that to 12 feet and 6x. Couldn’t find any 7x in my vest, or I would have gone longer. Then I tied on a size 16# soft hackle. They are typically a good choice in these challenging conditions.

The opposite bank was in deeper shade and trout were favoring the that side, lying wherever the water was a touch deeper. But they wouldn’t look at the soft hackle? And worse yet, sometimes the mere presence of the fly line cast over the water could cause the trout to disperse. So I had to wait several minutes between attempts.

It took me over an hour to do it, but eventually, I got a trout. I had to tease that fish up with a terrestrial – a red ant dry fly. The brown trout was 11″ in length, and in the photo above it has just run out the left side of the image. Still I was happy to hook it and release one. Long casts, long leader and a bunch of patience did the trick. Fishing far and fine.