Back in May the presses at American Angler ground to a halt. Yes, the magazine remains online but it is no longer in ink. Yet, another sign of changing times. 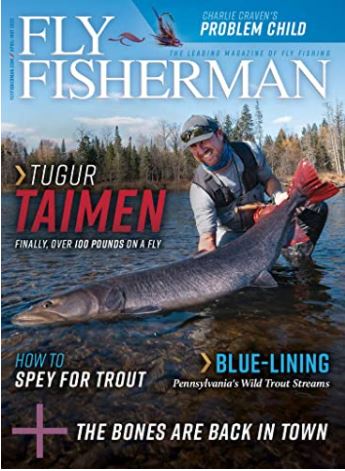 American Angler had been in print for a god’s age, dating back to 1978. In was born under the name Fly Tyer, the brainchild of Dick Surette working out of his fly shop in North Conway New, Hampshire (Now called North Country Angler). Slowly it morphed into American Angler & Fly Tyer, and then simply American Angler.

Back some 28 years ago, Abenaki Publishers of Bennington, Vermont, owners of  Fly Tyer, Warmwater Fly Fishing, and Saltwater Fly Fishing, stepped in and purchased American Angler.  There it lived, under their guidance for roughly a decade before being bought by Morris Communications of Atlanta, Georgia, publishers of Gray’s Sporting Journal. During these years various editors held the helm including Art Scheck, Dave Klausmeyer, Phil Monahan, Steve Walburn, Ben Roman and Greg Thomas. Throughout it all, however, the magazine stayed on the path first envisioned by Dick Surette, focusing on the bread and butter issue of “How-to” and Where-to”.

Why did American Angler cease to print? One could cite a slew of problems that contributed, including the internet, but the root reason behind the death of print magazines is this – money. Declining participation in the sport, declining subscribers, declining advertising revenue, coupled with rising costs for printing and mailing have proven fatal. Believe me if the print edition of American Angler was producing greenbacks it would still be around.

Yes the almighty buck  rules. Even the corporation behind print magazines are rocky. Abenaki sold to Rodale back in 1997. And last year, Rodale went on the chopping block and was acquired by Penguin Random House. How’s Morris Communications? There are troubles there too, in my opinion. None of this shouldn’t be a surprise, my friend. Without proper cash flow things die. Yeah, moola is king. And that simple fact has also been behind the demise of a great many brick & mortar fly shops.

Update: The digital version is now gone too.

This entry was posted in Outdoor Writing. Bookmark the permalink.