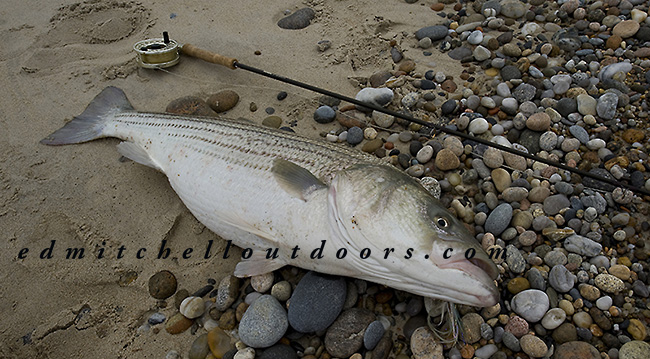 If you read my previous post, you know I held hope for a Thanksgiving striper. Well the stars aligned; and here she is.  Yes, for fly rodders on the New England coast, hunting for striped bass in November is a fantastic adventure.

Just before dawn I took a walk down a deserted Rhode Island beach – my 10-weight fly rod in hand. Gannets were working outside, always a terrific sign. And off in the distance, gulls worked the surfline. Naturally I jogged in their direction. When I got there sea herring were visible in the curl of the wave, back lit by the sunrise. Surely, something was pushing them into the surf.

Quickly I tied on a 7″ blue-over-white herring fly, and began probing the ocean’s edge. Moments later, a wild girl grabbed the fly. It happened within 10 feet of the rod tip. Man, when I felt her weight my heart leapt in my throat. Then with a slap of her shovel-wide tail, she charged down the shoreline, running parallel to the surf. Taking me in tow.

After 3 trips into my backing, she stopped and slugged it out in the blue-green waves. For a long time we were locked in a Mexican standoff. Honestly I couldn’t move her. Her strength was enormous. With the fly rod bent into the corks, I just kept the pressure on, as the surf thundered along the sand.

Slowly pumping the rod, I began backing up, gaining an inch or two of line at a time. Eventually I had her in the trough between the first and second wave. It was time to take a chance. Time to go for broke, but would the hook hold? Pulling as hard as I dared, I used the next large wave to beach her. Heavy, heavy fish!  It took both hands to move her.

Given her size, I’ll venture she was in the prime of midlife, likely born in Chesapeake Bay 15 years ago.  And had ever since come north in the spring to feast on New England’s bounty. No, she will not be gracing my Thanksgiving table. Moments after this picture, I let the beautiful beast swim free.  Now I’m praying for a bass for Christmas. And by then my wild girl will be back home a 1000 miles to the south – and have long forgotten me.

This entry was posted in Fly Fishing in Salt Water, Fly Fishing On the Beach, Wild Things. Bookmark the permalink.