Why do Redfish have Blue Tails?

Yesterday afternoon, I poled down the flat, once again seeking “tailing” reds. Unlike last winter, there is plenty of driftweed around this year. Its stacking up pretty thick on the flat, and that is a excellent sign. Driftweed carries food with it, mainly crabs. And that food is needed. Because at this time of year the main meal – baitfish- are beginning to leave.

Eventually I stop poling, scanning an area where I had seen reds the day before. Bingo. On cue, a redfish stuck up its tail. Man, you got to love it. And this fish was only 25 feet away. Silently exiting the Adios, I reached for my six-weight fly rod, trying not to make a sound. By now the tail had slipped below the water, but I could see a disturbance marking the fish’s location. Dropping the fly nearby, I began a slow retrieve. No response. The second cast, however, brought an instant strike. This red was aggressive. Fish on. 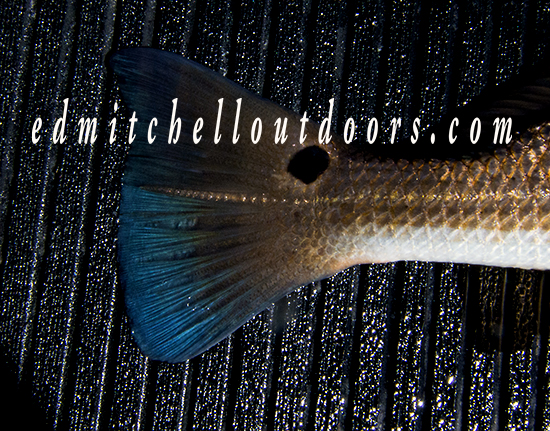 It was a small red, of about 18 inches – still a fun fish on a six-weight fly rod. Upon landing the fish, I noticed its blue tail. Wow, it was bright.

Why do redfish have blue tails? I’m not a sure. You don’t see it all the time; that I know. And it seems more prevalent during the cooler months. Some say it has to do with the fish’s diet; that makes sense. And in particularly it is due to a certain type of algae (blue-green algae also known as cyanobacteria ?) in the water. The forage feeds on the algae, absorbing its color. Then the reds eat the forage. And, in turn, the color bio-accumulates in the red, showing up in the extreme end of the tail. Whatever the reason, its sure adds a nice touch. By the way, I’ve seen bonefish with blue tipped tails too. (More recent post)

2 Responses to Why do Redfish have Blue Tails?