Well, the bite continues. Sunday held a high tide around 10:30AM, and it promised to ebb until almost 5PM. That meant a long day of moving water. Good news. On the other hand, the wind was 10-15 southeast. An odd wind for this time of year. But at least it was keeping things warm.

By 11:30 AM, I was working the shoreline. Poling the Adios along the mangroves, from spot to spot, I found plenty of reds and snook. And they were in an aggressive mood. No big fish, mind you. But it made for steady action into early afternoon. 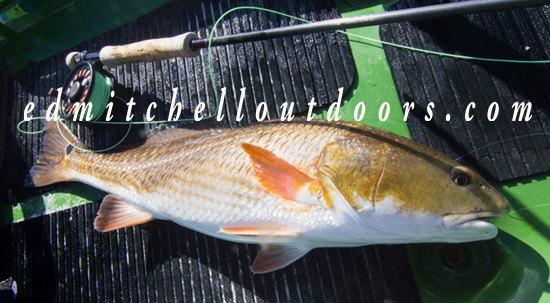 As the ebb progressed, eventually the sandbar started coming up. I poled the Adios there and staked out on the bar. Over the grass beds inside the bar, the water was just knee deep, ripe for “tailing” reds. The only problem was the southeast breeze. Reds around here only “tail” in calm conditions.

I kept my fingers crossed the breeze would drop as the sun lowered into the west. And thankfully it did. Now conditions were perfect. When the first “tail” popped up, I got buck fever and rushed my cast. Welcome to failure. Damn. Then another “tail” appeared several yards away. I waded into position and made a better cast. Wham. This time I connected. Right off, I could tell it was a fair size red by the way he steamed across the flats, stripping line off the reel.

After two more good runs, I started backing him up towards the Adios, which was sitting in shin deep water about 50 feet away. Slowly the red followed along, but in a clever effort to bust me off, he suddenly shot forward, around my stakeout pole, and then went back under the kayak. Man. With the rod held high, I circled the Adios on the run; believe me. After that trick, he gave up. It was a fine angling adventure, a 7 pound “tailing” redfish on a 6-weight fly rod. 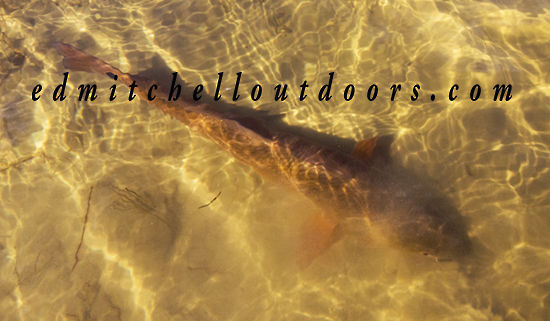