A One Tide Day

Today was a one tide day.  That’s right one tide from sunup to sundown. Low tide arrived around 3:38 AM, and high followed at 7:47 PM. Get a load of that, 16 hours of painfully slow incoming water. Total tidal range you ask? About two feet. How crazy is that stuff? But that’s Florida for you. Unlike my native New England, tides are complicated down here.

Typically I avoid one tide days like the plague. Why? The fishing is apt to be as slow as the water. Today, however, after a long period the wind was finally down, the sun was out, and I just felt a burning urge to get out and pole down the flat. Yeah, it was time to hit the water.

The morning flat was like glass, raising my hopes of seeing a “tail”.  Alas, that wasn’t in the cards. No shots at reds. So I parked the Adios on the sandbar, got out, and waded along, chucking a fly over the grassy beds on the bar’s outer edge. A couple casts later, a big spotted seatrout nailed the crab fly. That fish measured  22″ and the Boga reported it to be a crack under three pounds. As I have mentioned prior, Charlotte Harbor is a nursery area for “trout.” So any “trout” over “15” is called a better fish, and any “trout” over 18″ is a big one. A 22″inch “trout” is heading toward…….huge.

A slow but steady bite for good size “trout” continued all morning. Nice. Kept my 6-weight rod bent. Still the best one was yet to come. Around noon, I was working a deep trough when I got a wicked strike. The fish fought hard, running out line several times, and staying deep before circling me twice. Sure felt like a small redfish to me. Imagine my surprise when it turned out to be a 27″ spotted seatrout, weighing 4 pounds. My best  Charlotte Harbor “trout” ever. What a fine one tide day! 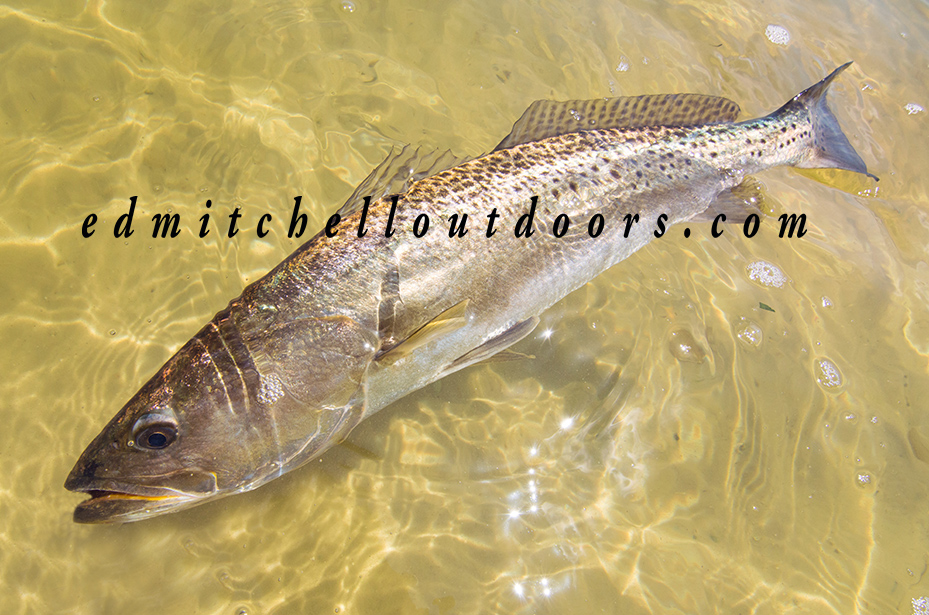