The Church of St. Kilcatherine in Ireland

Recently a number of people came by to view the first four posts on this site back in 2011. Those posts pertain to the Church of St. Kilcatherine in Ireland. It is, at times, also referred to by the ancient names of Chellchatthigern, Cill Chaitighern, St. Caithinghearn, and kyllcharrine. By whatever name you chose, however, this ancient stone church is a place of great intrigue.

You’ll find it near the small village of Eyeries, on Ireland’s Beara peninsula, sitting high on a knoll overlooking Ballycrovane Harbor, with the Miskish Mountains rising to the south. Believe me it is well worth a visit, for a trip here is a time machine. The first building on this site is thought to have been done in the 7th century by the same monks that made the famous beehive cells atop the precarious perch of Skellig Michael. The church in the picture was likely built slightly later. Still we’re going back over 1000 years, well back into the Dark Ages. ( See a more recent post for additional information) 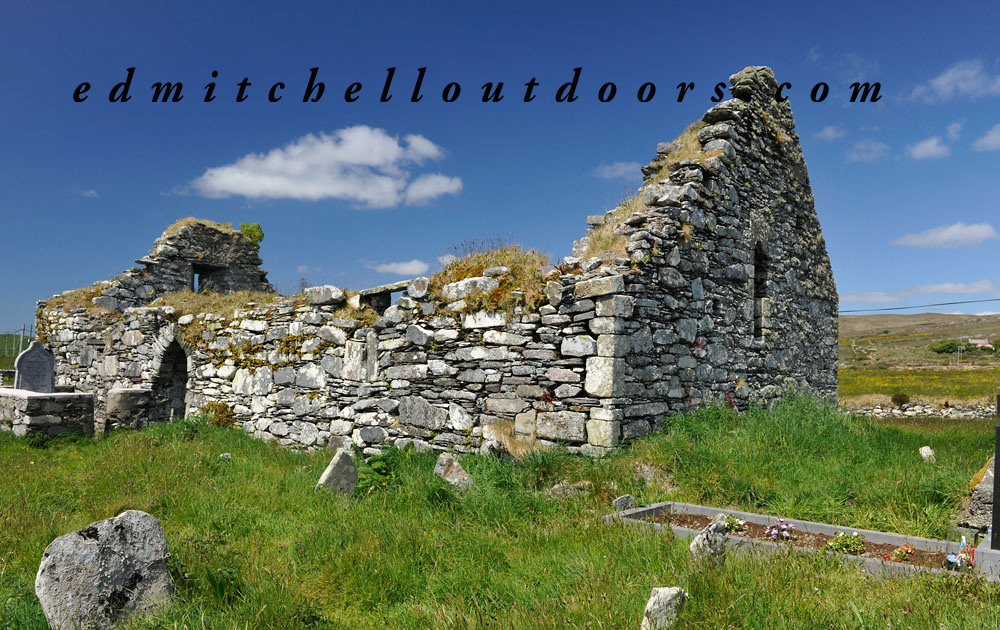 In the original posts I mentioned my fascination with the variety of  crosses found in the church’s cemetery. Frankly I’ve never forgotten them. Along with their sheer variety, they are wide-believed to be among Ireland’s oldest. With those things in mind, allow me to take a moment to show you a few of these many crosses. Hopefully you will find them of interest too. 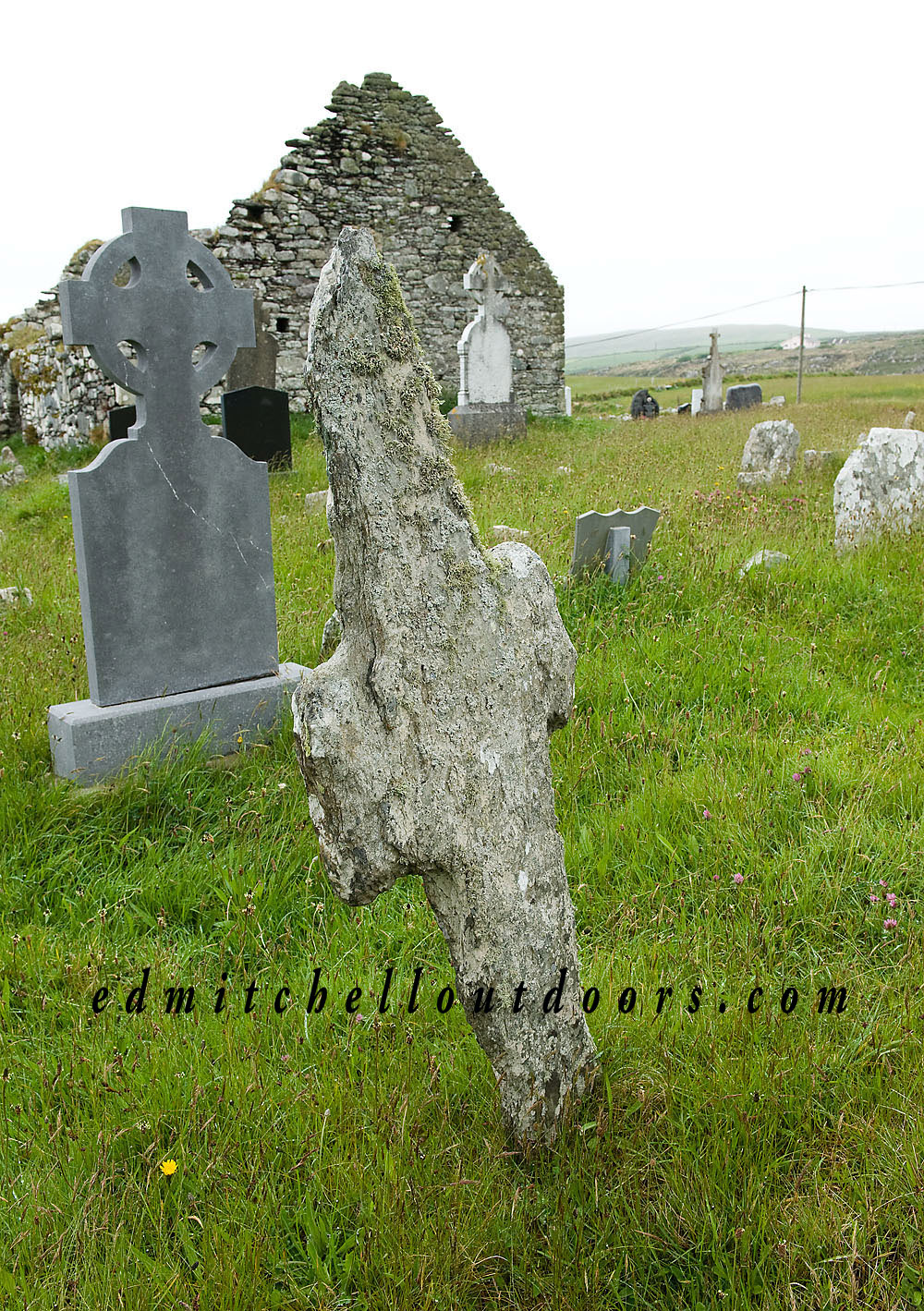 The Earliest Christian Cross in Ireland ?

The cross to the left was made in the 7th or 8th century, and has stood vigil here over 1200 year. Amazing. That age makes it perhaps the earliest Christian cross in all of Ireland. Standing about 5 feet tall and 20 inches at its widest point, it is crudely constructed. Although the date puts us well into the Iron Age, the cross appears – at least to eye -to have been made by simply striking one stone against another. 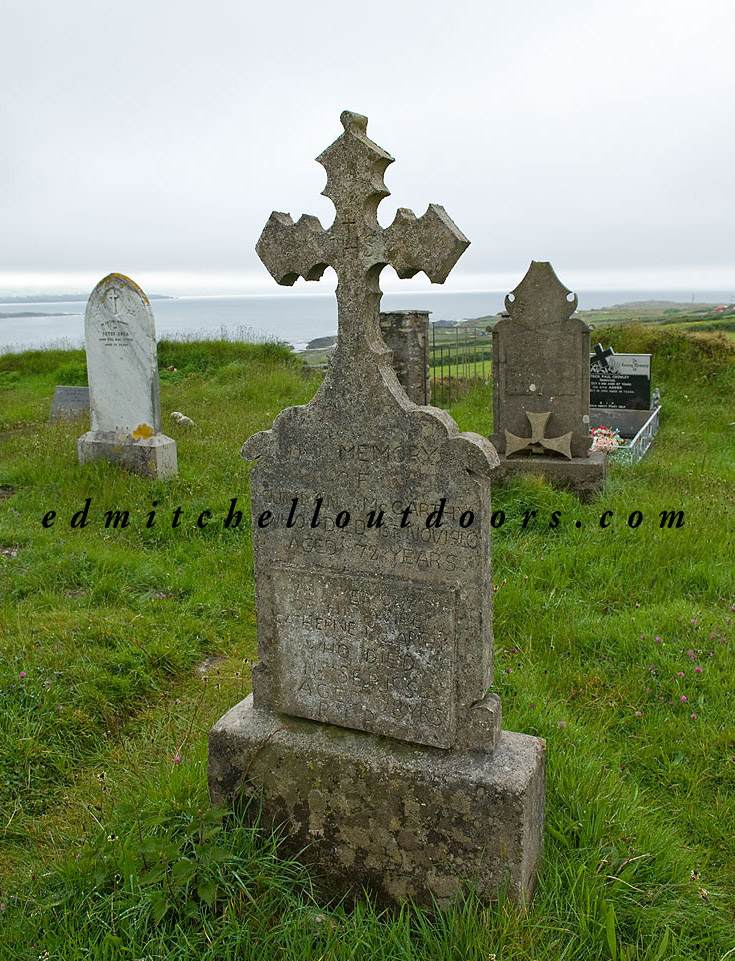 It should be no surprise that the graveyard contains a number of  Celtic Crosses. The Celtic Cross is not only well-known, it is a bold and attractive design. But what surprised me was the large number of unusual crosses.

Now lets take walk into the graveyard. Check out the cross to the left, for example. Taller than wide, it has the basics of the common Latin cross, but look at the arms. They radiate out in spear-like points. This is sometimes called a “barbed cross”.

Also look farther back to the right and rear. There is a tombstone that has lost what is a Maltese or Iron Cross. It is also know as the Pattee or “footed cross”. (A red Pattee against a white background becomes the Templar Cross.) 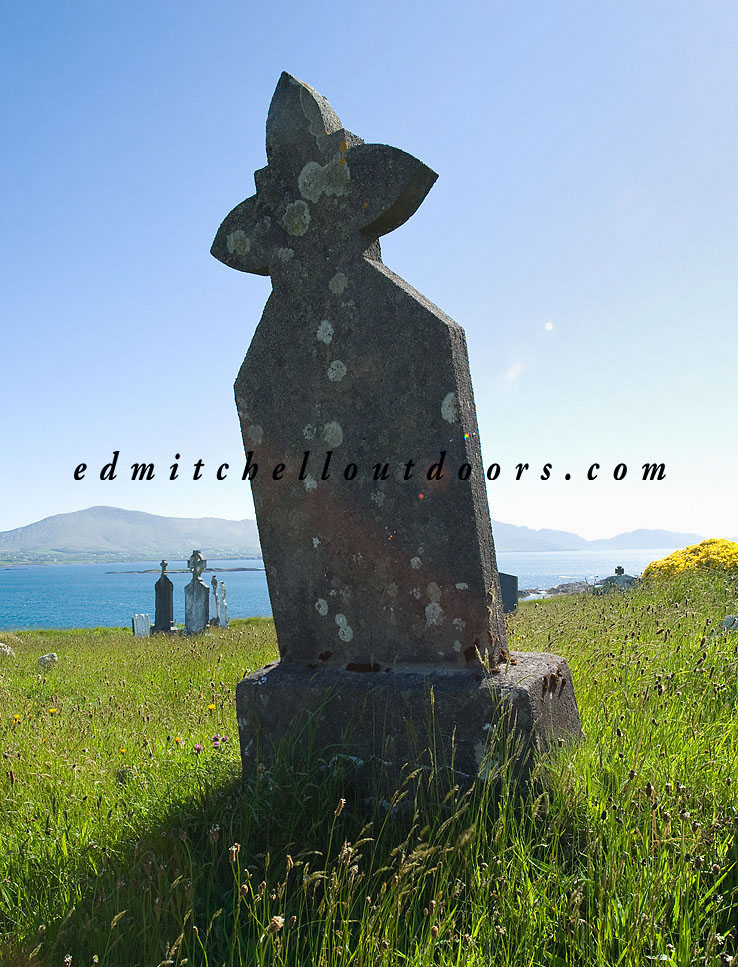 In the next photograph we see a strong, sturdy looking cross, with a square center. For me it holds a powerful, and almost military stance. And in that notion may be the source of these many cross designs. Perhaps they are born out of heraldry, a desire that began around the 11th century for knights, rulers, families and tribes to brand themselves with special emblems, coat-of-arms and flags.  Very often these things contained symbols such as swords, shields, and mythological beast. But they also could hold unique Christian crosses.

In the photograph below, we see  a cluster of three different crosses. With their clean hard edges, these are clearly of more recent origin, and may had been made by the same person.

The middle tombstone is the shortest and simplest. With its height and its arms near equal, its may be called a Greek style cross. The other two are taller than wide and so are similar to the Latin cross. Two of these have circular centers similar to a Celtic Cross. 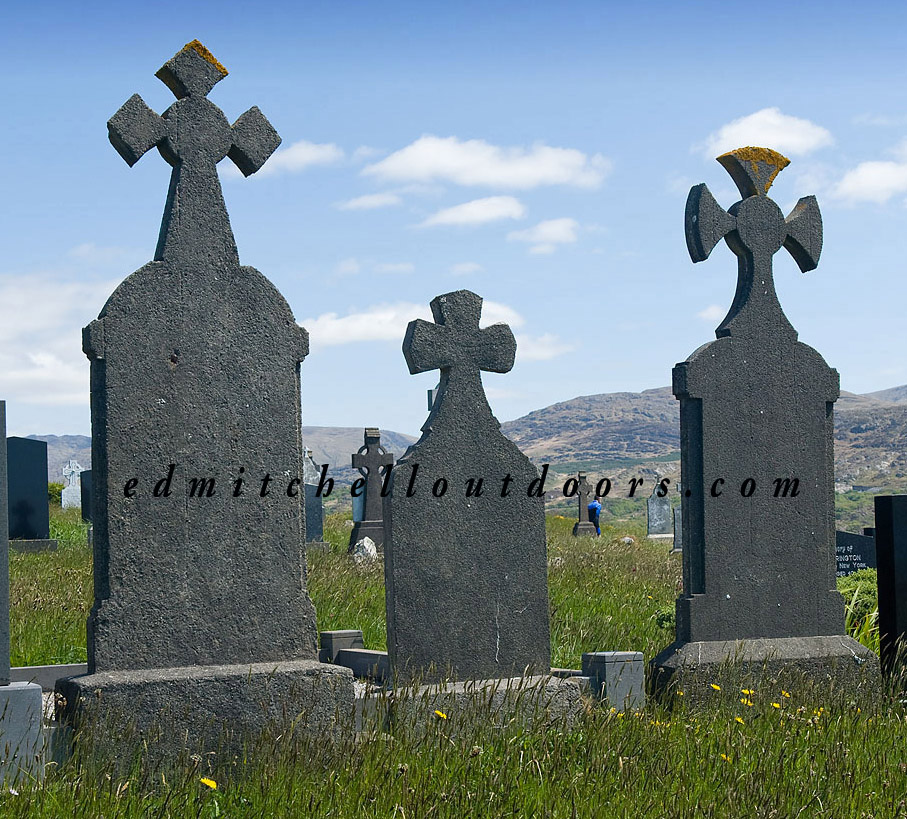 Yes, there are more I could show you. Still I hope my point had been made. There is a sense of mystery here, a hint of the infinite – a feeling one is in touch with lives and centuries long pass.  More on this church