Part One: Back in 2011 when this blog began, I did a series of posts about Ireland’s Church of St. Kilcatherine on the Beara peninsula. Since then a fair number of people have viewed these early posts, and that continuing level of interest has spurred me to once again tell you more about the church and how I came across it. Part Two here

A Rainy Day on the Road out of Ardgroom

Ten years ago, I was in Ireland visiting my friends Jim and Jane, who live seaside in a wonderful home on the Beara. Knowing the surrounding coast held stunning beauty, I brought along a backpack. My plan was to spent three weeks doing daily hikes. All told I ended up trekking about 70 miles, of what is now called Ireland’s Wild Atlantic Way. It was a terrific adventure.

On the day I came across across the Church of St. Kilcatherine, I had sent out to walk from Ardgroom to Eyeries. It was a gloomy morning, mixed with periodic rain, drizzle, and fog. Despite the weather, I continued on hoping conditions would improve. The route I had chosen was along a series of ridgelines. This route not only promised high views of the coast, but was the shortest way to reach Eyeries. Unfortunately it proved to be impossible. 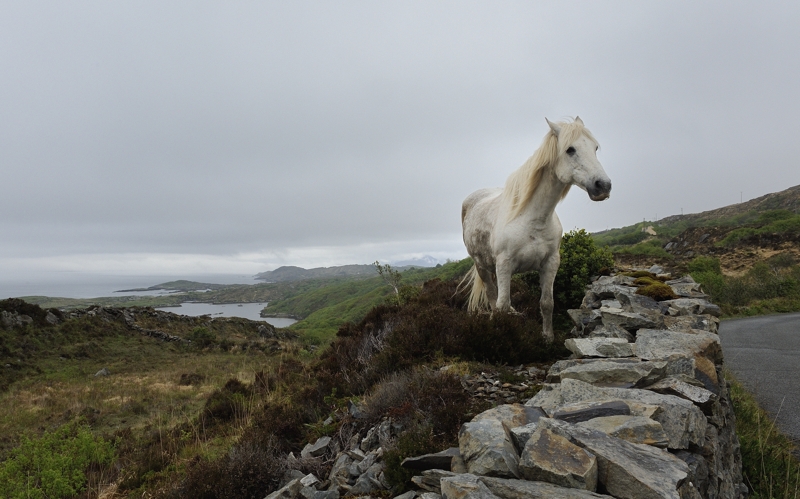 The coastal road to Eyeries

The heavy rains of the night before had turned the steep hillsides into sheets of running water, making any ascent extremely difficult. After falling several times, I had no choice but to descend and take the coastal road instead. After all, I was alone in a remote location and if I twisted an ankle it might take days to be found.

The entrance to St. Kilcatherine

The coastal road came at a cost, however, doubling my distance to Eyeries to about 17 miles. That is a long hike, my friends, in the rain with a pack. Still it proved to be an enjoyable journey.

Late that afternoon, tired and soaked to the skin, I came to a sign for the Church of St. Kilcatherine. The gated entrance to the church yard was small. After stepping through, I dropped my pack and explore the ruin. Ireland is filled with ancient history,  and this  is a wonderful example. Religious ceremonies, both pagan and Christian, have gone on here for well over a thousand years.

The graveyard is home to an amazing collection of crosses, whose varied designs speak to passage of time and culture. To learn more about these crosses visit this earlier post.

2 Responses to More on Ireland’s Church of St. Kilcatherine