Stocked trout, especially freshly stocked trout, can be easy to fool. After spending their entire prior life in a holding tank, they are ill prepared for the ways of the wild. Hey you would be too. And as a result, stocked trout may strike any fly flung in their face. On the other hand, however, stocked trout are unpredictable. 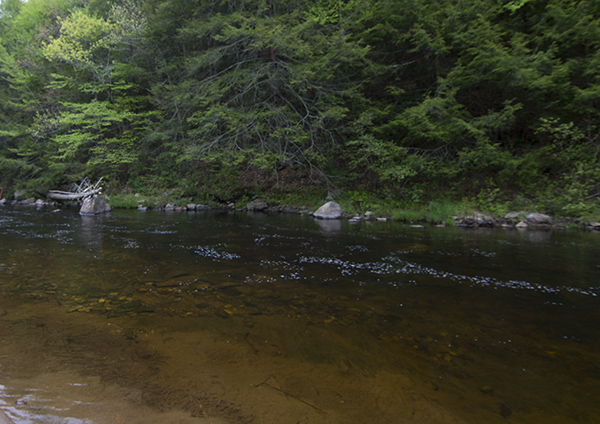 For the last couple of years I’ve been fishing the Florida flats. So its been awhile since I’ve wet a line in a trout stream. But today I did. Its was a blast, and reminded me how unpredictable hatchery trout can be.

Within ten miles of where I’m staying is the Salmon River. Now there are a zillion rivers by that name, but this one winds through the beautiful Salmon River Forest in Colchester Connecticut.  Its a freestone stream, small and clear, with ample public access. Stocked trout. And more than enough public pressure.

I climbed into my car with my favorite trout stick, a Winston fiberglass rod, my old vest and a pile of flies. Felt great. Since this river doesn’t have a lot of hatches, I figured I would be primarily nymph fishing. As soon as I got there, however, I saw splashy rises. Ahhh…..caddis, I though. I put on a size 14 Elk Hair, and preceded to get nothing. Wow I figured these hatchery hound dogs would slam that fly. Go figure.

Then I also noticed some “smutting” rises. Well we all know that means midges are on the menu. I clipped off of the Elk Hair looked for a much smaller offering, settling on a size 18 Henryville Special. Great little fly. Wham I was in business. The Henryville worked, but only if I got a perfect drag-free float. Wow. Surprisingly these stocked trout were very selective, and demanded that I presented the fly just right.

Courtesy of the Henryville, I landed a handful of small trout in all three flavors -browns, rainbows, and brooks. Man I was a happy angler. Then suddenly the Henryville became persona non grata. The fish kept rising but they wouldn’t look at that fly for all the trout pellets in China. It was useless. Clearly I had to change feathers. And most likely the best bet would be to go even smaller. I opened my fly box and the first fly I see is a size 12 Humpy. Now that fly made no sense over these selective “smutting” trout. What the hell , I tied it on anyways. Those fish slayed it. Amazing. Stocked trout are unpredictable!