Part One: Sometimes a fever comes on slowly, and then keeps on building. Well, that’s exactly how my love of Winston glass rods began. It started slowly way back when with a travel set – a 6-weight and an 8-weight – and grew from there. Eventually I ended up with a slew of Winston “glass” rods from a 6’6″ 2-weight to a 9 foot, 12-weight. And lo-and-behold, now I have one more! This time its a Winston 5-weight fiberglass fly rod.

All my previous Winston “glass” rods were built in Montana. This rod was not. It is from San Francisco, and likely done by Doug Merrick in the early 1970’s. If so, in those years it sold for the princely sum of $65. (I acquired it from Rick’s Rods a respected purveyor of classic gear.) Amazingly, this thing appears to be in like new condition – unfished. The cork grip and the reel seat are pristine. The ferrule is not worn or marked. The logo on the blank is bright. (Typically they darken when exposed to sunlight) And the guide feet have not caused an honorable scar in the red windings, indicating the rod has rarely been flexed.

Not surprisingly, the blank has the same color and general appearance of the Montana rods. Hey, they were all made by J.K. Fisher to Winston’s specifications. Windings are the same color too, although applied a bit differently. Most notable is the three turn open spiral you see in the photo above. In the Montana years, that tightened up considerably. The aluminum reel seat is a two-tone, double-down locking Varmac, I believe. Back then this was likely an optional upgrade over the standard slide-band seat. The grip is a 6.5″ half Wells. The winding check above the grip is black plastic. There is a single Carboloy stripping guide, followed by 7 snakes and a tiptop. The spigot ferrule is white.

Note that the rod sock is grey, not the customary red poplin. And the sock lacks the well known green-and-gold woven label. Both things indicate this rod predates the later changes Tom Morgan made. Above the hook keeper, my Montana rods are marked with the rod’s weight, length, fly line designation, and serial number. This rod has none of that information. So, I did a few measurements of my own. The rod is definitely a two-piece 7-footer. And it tips the scales at a lean and mean 2.6 ounces. Wow! That truly surprised me. In fact I checked it twice. Friends, this is an exceptionally light fly rod.

Now, is it a 5-weight? Good question.  Its not marked 5-weight on either the blank or the rod tube.  So I can’t be sure until I put a line on it. Rick’s records show it to be a 5-weight, however, and I’m fairly certain it will prove to be. Why? In hand this is a light action rod. Felt like it might even be a 4-weight? But Tom Morgan tell us that the lightest “glass” rod Winston advertised in Merrick’s time was in fact a 5-weight. Furthermore Merrick’s shop stocked a 7.5 foot, 5-weight “glass” blank. Which could have easily been shorten to 7 foot. In the next post we’ll take her out for a whirl, and find out more. 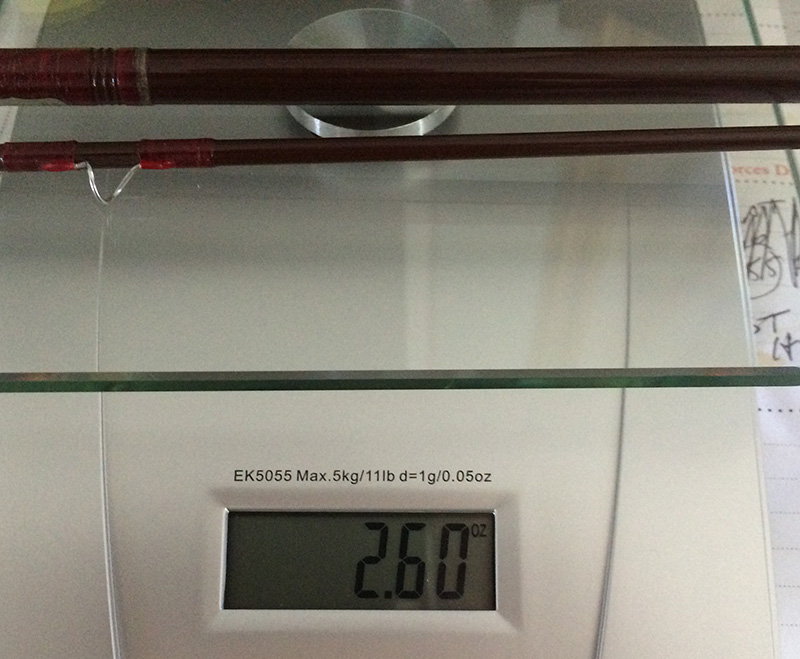 UpDate 3/2020: Recently I had a chance to see the inside of a Winston Catalog printed during Doug Merrick’s era in San Francisco. On page 13 there is mention of a series of rods under the heading of R.L. Winston Ultra-light Fiber Glass Trout Rods.  There are five rods in this series ranging from 5 1/2 foot to 7  1/2. All are rated for 5DT fly lines! I believe this rod is part of that series. Mine has a down-locking reel seat. Interestly enough this rod was also available with a cork reel seat. With cork the rod was said to tip in at 2 1/8 ounces!!! Astounding.

6 Responses to A Winston 5-Weight Fiberglass Fly Rod: Part One