Part one: Alright! Got another fiberglass flea flicker to talk about. This time around its a Diamondglass 8-foot, 4-weight fly rod. This black beauty came out of an estate sale, in Vermont. The rod may be 8 or more years old, but is in unused condition. The tube even has the original cellophane wrapper. Quite a nice find.

This wand was made by the Diamondback company. (Later I’ll share the little I know about their history) It is an American-made rod, the blank is black, 2-piece, with a very slim tip-over-butt ferrule. The reel seat is single “uplocking”. Given its bright shine, it is likely German silver.  The insert appears to be rosewood. The 6.5″ grip is reverse-wells with a near superfine taper. The rod has one stripping guide,and 8 snakes, plus a tiptop. All wraps are dark red tipped in clear (a little reminiscent of Winston glass rods). And the rod weights in at 3.1 ounces. Overall, the workmanship is of the highest order. Without a doubt, a great deal of skill and care went into its construction. 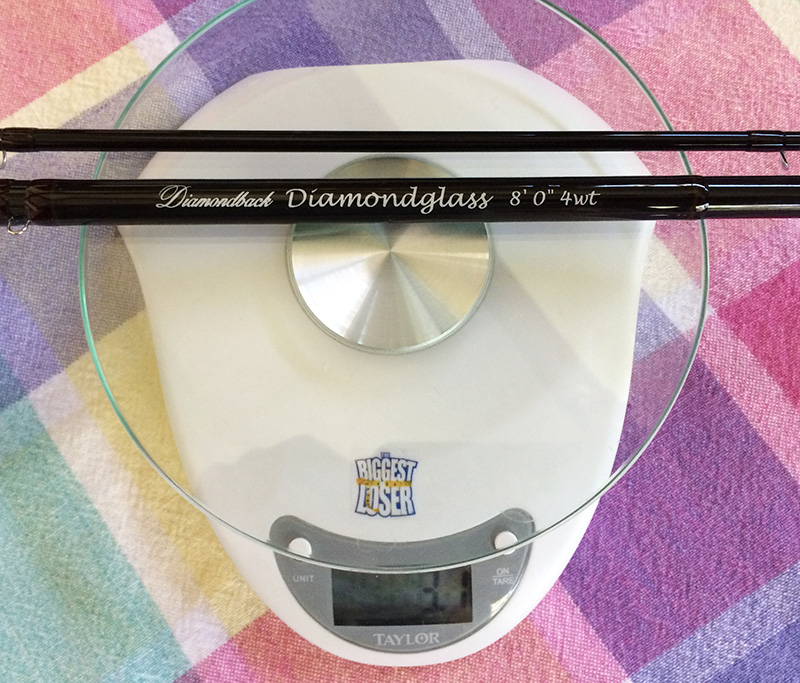 A Diamondglass 8-foot, 4-weight fly rod weight in at 3.1 ounces

Among fiberglass fanatics, these “original” American-made Diamondglass rods have an underground cult following. To this day, rumors revolve around their fine casting ability and the quality of the build. So when I finally came across one, I immediately jumped on it.

In the next post I’ll give you my opinion of this rod’s performance, but for the time being, allow me to tell you the little I know about the Diamondback Company.

To the best of my knowledge, the original company was started in the 1980’s by Billy Alley. It was locate in Stowe, Vermont and attached to Bill’s business called The Fly Rod Shop.

In 1991, Diamondback was taken over by Baron Merle-Smith, who greatly built up the brand selling both graphite and glass fly rods. Around 1998, Cortland stepped in and purchased Diamondback. For a time the rods continued to be built in the same way they had been prior. In a cost saving move, however, Cortland eventually decided to have the rod blanks built in China (Those “glass” blanks are blue in color). Then in 2006 Cortland opted to close down the entire Diamondback operation. And it’s said sold off many of the remaining blanks to custom rod builder Mike McFarland.

A year or two ago, Diamondback reopened their doors under new ownership. They are now located in Central New York and offering an E-glass fly rod called the Meeker. Can anyone out there add anything about Diamondglass fly rods? Love to hear from you.  Read Part Two

2 Responses to A Diamondglass 8-foot, 4-weight fly rod: Part One