Do Flats get Damaged?

Do flats get damaged? You bet. Sometimes its Mother Nature at work. Wind, super moon tides, tropical depressions, hurricanes, all take a toll. And they can change a flat overnight, believe me. I’ve seen it happen. But other times the damage is man-made. That’s right we’re to blame.

Prop scars are the most common type of man-made damage. We have all seen them. Hell, on some flats they crisscross all over the place. Captains misjudges the water depth and next thing you know the prop starts digging a path across the bottom, often ripping up long strips of turtle grass. Not good. Not good at all. Turtle grass is a life link on the flats. Its critically important. And those grass scars can take twenty years to heal. Two decades!

Yesterday I came across the biggest man-made damage I’ve seen in a long time. I’m paddling along the sandbar, when I saw a dark patch up ahead where none existed before. Ummmm. As I got closer I climbed out and took a better look. It was a deep hole in the sandbar. Damn. Meteorite maybe? 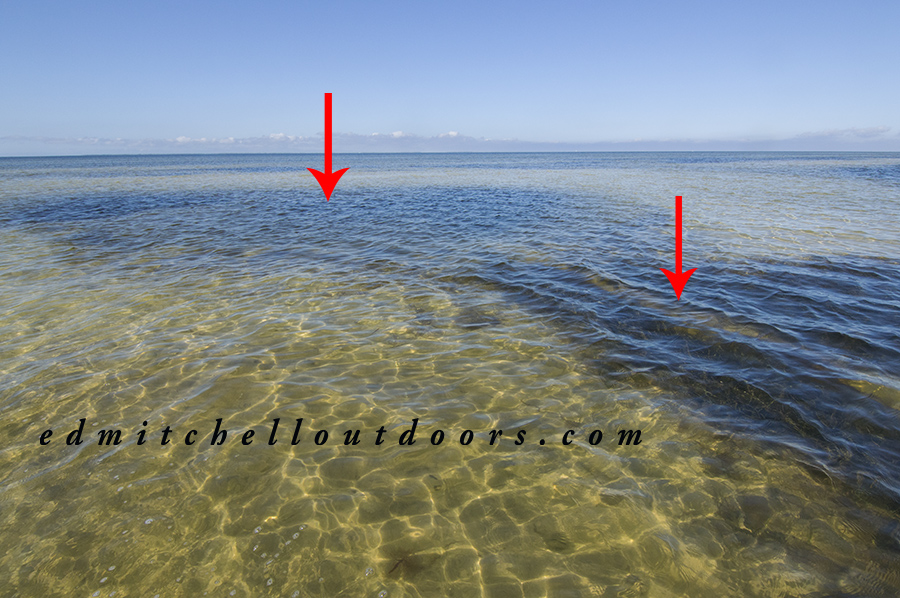 Do flats get Damaged?

Naaa. Apparently some captain tried to exit the flat by crossing the sandbar. (In the picture he was traveling from right to left.) Well the tide wasn’t deep enough. The red arrow on the right points to his approaching prop scar through the turtle grass. Out of the picture on the extreme right, there is a hole were his prop first banged bottom. It tells me the motor popped up on impact. But that didn’t save our intrepid captain. Oh no, he was traveling fast. So the boat’s forward speed propelled it up on top of the sandbar, where it ran aground. My, my. Problems in paradise.

The left hand red arrow tell us what happened next. Stuck on the sandbar, our skillful captain decide the best course of action was to jam the throttle wide open, hoping his motor would vault his crazy-ass over the bar. Sorry, captain no way. Instead the motor just burned a hole in the sandbar. It must have been a lovely sight. Just imagine his outboard sent up a rooster tail of mud and sand half way to the sky. Probably visible for a mile or more.

So how big is this hole in the bar? Its approximately 14 feet in diameter. Man oh man. This knucklehead spent some time, and gas on this misadventure. Good going captain. You’re an ace. And get this, the hole is five stinking feet deep! That’s right five feet deep. Incredible. The only good news is this: there is no exit mark. He never made it over the bar, and likely had to get help. Believe me he needs help.

This entry was posted in Environment, Fly Fishing in Salt Water, Uncategorized. Bookmark the permalink.

2 Responses to Do Flats get Damaged?