Irma Cometh: Well, I got out of Dodge..make that Punta Gorda. Flew back to Connecticut last night. Hurricane Irma cometh to town.

She just looked too big, too strong, and too aimed at Florida for me to ride it out here. Started getting ready three days ago. Taped up the windows, dropped the shades, dragged the kayaks inside, emptied the furniture out of both lanais, carried in the grill, took down the art work, hid all the valuables in the strongest room, chucked out the food in reefer, chucked out everything in the freezer, shut off the water, secured a plane reservation, and packed a bag. 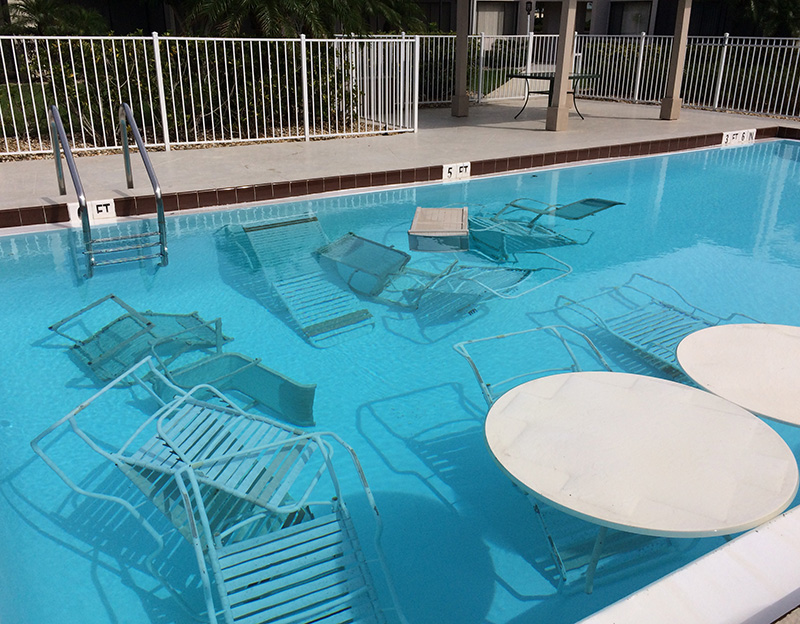 Meanwhile, outside there was a shit load of patio furniture around the community pool. In a hurricane, they were all potential missiles. Not as dangerous as North Korean missiles, but dangerous, believe me. Unfortunately, there was no place to store that gear. So I got the green light from the property manager to sink the stuff. No choice, really. Had too. Put on a bathing suit and went to work. The photo above show the project about halfway done. Eventually I got it all scuttled.

At that point the stores were out of water, the gas stations out of fuel, the highways gridlocked, and some flights being cancelled. I’m praying no one gets killed, and my adobe survives.

This entry was posted in Environment, On the Road. Bookmark the permalink.