A Red Tide for Christmas

A Red Tide for Christmas:  A couple days back, I got out early once again to take advantage of a decent morning tide. Right off it became apparent, however, all wasn’t well on the flats. The water was murky for one thing. That was odd. But more concerning was the floating and submerge corpses. Dead mullet dotted my route – one here and one there. Oh shit, red tide!

Roughly a year ago, red tide paid us a visit here in Charlotte Harbor. Last time the body count was much higher. Still no one wants red tide at their doorstep regardless of how light the concentration.

For weeks now, red tide has been residing along Sanibel Island’s beaches. Lotsa dead fish washing up on shore to rot in the sun. Bad news for the tourists. Hell, bad news for residents too. Now its seems the strong tides of last week, coupled with a shift in the wind, have pushed the red tide northward into Charlotte Harbor. Yikes red tide for Christmas. 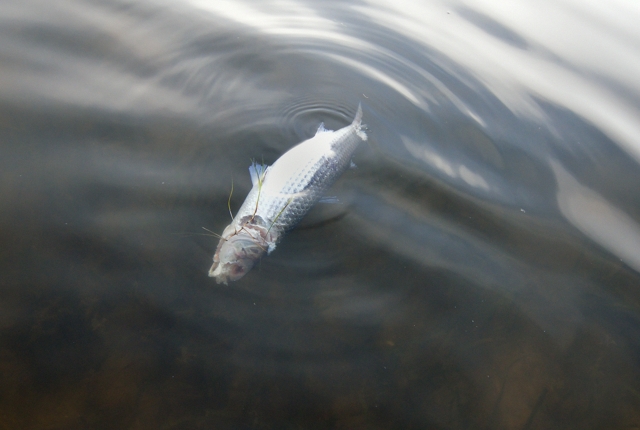 Florida Fish and Wildlife monitors red tide and offers a map of its location and intensity.  Caused by the the microscopic dinoflagellate,  Karenia brevis, red tide is typically little more than a nuisance to beach goers, causing irritated eyes, scratchy throats, and sinus problems. Red tide’s effect on fish, however, is deadly serious. It can kill them in large numbers, especially mullet, affect birds, and even kill manatees. Yes, it also can accumulate in shellfish, where it develops a toxin (brevetoxin) that is possibly fatal to humans. By the way cooking doesn’t remove these toxins from either fish or shellfish.