Tip when using Korkers with the Interchangeable Sole System

Tip when using Korkers with the Interchangeable Sole System: For over a year I’ve been using Korker wading boots with the interchangeable sole system. Its a great idea. And I appreciate the thought that went into designing these boots. Great innovation. I have a tip for you, however, especially if you wade through heavy mud.

A week ago, I climbed out of my Adios and trekked down a long flat. I was in an area that has some soft bottom, and my weight caused me to sink in a bit. Nothing unusual really. When I got back to the kayak, however, I discovered that my left boot was minus it’s sole. (Vibram rubber) Apparently the suction of the mud had pulled it free without my noticing it. And then it fell totally off. I was terribly surprised, believe me. 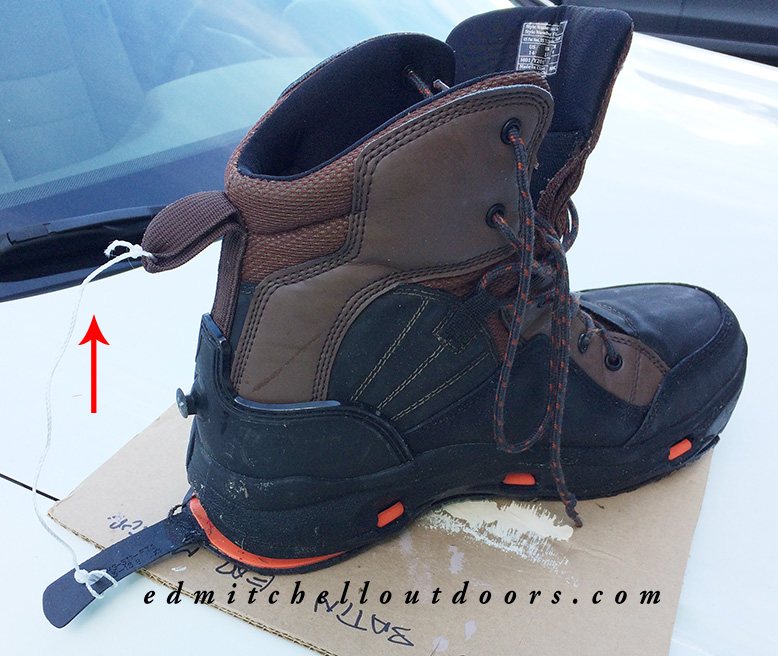 As luck would have it, I had an extra sole back at the house. A couple mornings later, that sole pulled loose too, although I caught it in time. In both cases it was my left boot, so the problem likely lies with that shoe rather than the sole. But I’ve decided to tie the sole off just in case. And if you wade in mucky places, you might consider this trick too.

Please note that I’m using a very thin string. Why? Years back I read “Fishless Days and Angling Nights” by Sparse Grey Hackle. Great read that. In the book, Sparse Grey Hackle relayed a memorable and scary story about wading along an alder thick stream bank. At one point his wading boot, which had a studded sandal attached, snagged a submerged root. It was too deep for him reach down and free the boot. And the root proved too strong for him to break off. He was trapped, unable to move. I’ll let you read the book and find out how he got free. But this is why I strongly recommend a thin string, one you could easily break off if need be.

This entry was posted in Gear. Bookmark the permalink.