On the Flats Presentation is King

On the Flats Presentation is King: Yesterday morning, it was proven to me once again – on the flats presentation is king, fly pattern is queen. No matter how big the “killer” reputation of your fly; no matter how much faith you have in it; no matter how well it was tied; unless you present it properly it is likely to fail. To be effective on the flats, the fly must land softly, and be right on the money. And even then the fly has to move in a way that sparks the fish to eat.

Dawn on the Flats

Following a bright warm day, Gulf water temperatures rose slightly. So when my friend Dave suggested a dawn raid for “tailing” reds I jumped at the chance. We had an early morning -.30 ebbing tide, and dead calm winds. Perfect conditions. In the photo above you see the sandbar coming up in the foreground. Between the bar and the shore are extensive  flats with turtle grass. With luck, that’s where our “tailers” would be.

Dave waded north and I went south. The action lasted roughly 40 minutes. But in that brief window of time, we both caught a red. My first shot at a “tailer” didn’t go well. Unknown to me, there was a red lying hidden beneath the surface between me and my target. As the fly line fell to the water the unseen red spooked, causing my “tailer” to zoom off too. Damn. Minutes later, however, I got another opportunity. Three “tailing” reds were clustered together, about 150 feet away. Wading carefully into range, I delivered a cast, but as the fly was about to land, the trio moved slightly to my right. They never saw the fly. My next attempt was more of the same frustration – the fish moved right again. On third cast I decided to drop the fly just ahead of the them. Bingo, they slid over and found the fly right off. Wham. That presentation worked! 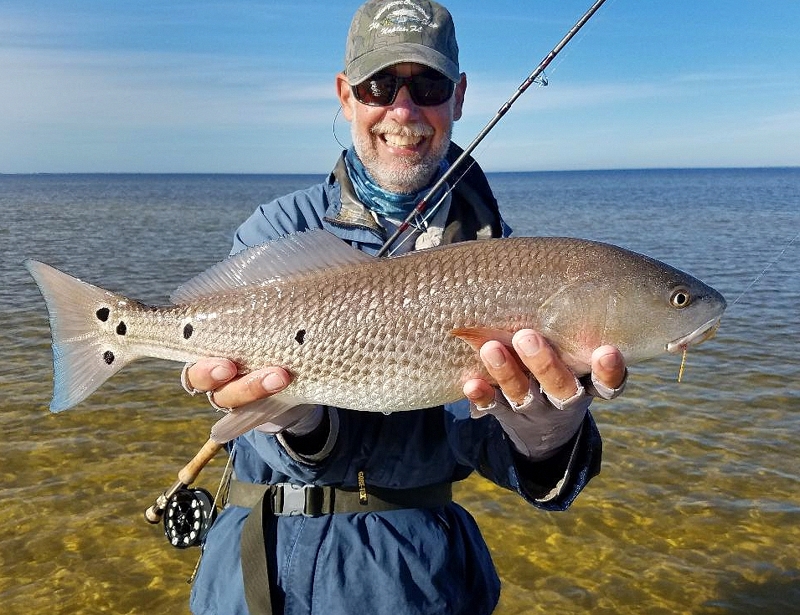 Dave caught this red outside the bar

Later that day, Dave caught a red outside the bar on rising water. See it above. Nicely spotted red, it sported the blue rimmed tail so common in the colder months. (earlier post on this subject) This coloration is, best I know, caused by cyanobacteria (blue-green algae) in the food chain. Also note the light, chrome like, sides on this red. It indicates it has been recently living over sand bottoms, rather than in the darker water of the backcountry. 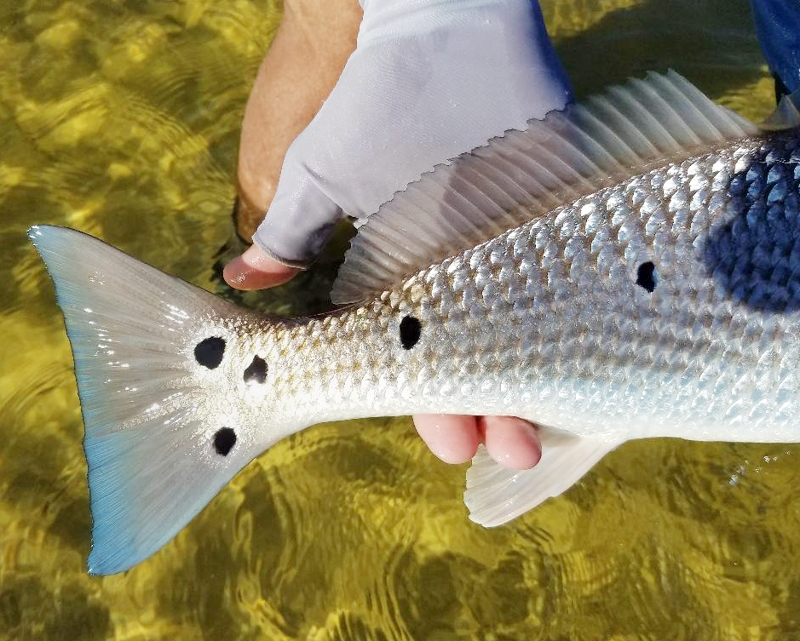 The Blue Tail so common in Winter

2 Responses to On the Flats Presentation is King