The Art of the Soft Hackle:

A month back I was in New Hartford, Connecticut, knee deep in the Farmington River watching a master at work. His name is Pat Torrey and he has been fishing this fabulous river for over 40 years.

At that moment the Pat was teaching a class on the art of the soft hackle. And I’m glued to his every word. Tall lanky and armed with a wry sense of humor, Pat delivered the gospel from a midstream, showing us the dos and don’t of these fine flies. Its was both informative and entertaining. Just what I had hoped for.

Soft hackles are nothing new, of course. Along with their generic cousin the wet fly, soft hackles are as old as the sport itself perhaps first rising to notoriety in the 1600’s on the lochs and rivers of England and Scotland where they were often referred to as “spiders”. Their popularity steadily expanded, eventually leaping across the pond to our shores, where by the beginning of last century wet flies ruled American trout streams. If you have any doubt open a copy of Ray Bergman’s seminal book Trout, and flip through the wonderful color plates. Hundreds and hundreds of wet flies reside there, beautiful flies with long forgotten names.

By the late 1970’s, however, things were changing. Our interest in subsurface flies swung to nymphs, fueled by books such as Ernie Schwiebert’s Nymphs, in 1973, and then in 1976 by Charles Brook’s Nymph Fishing for Larger Trout. During the next decade our fascination with nymphs grew exponentially with the advent of strike indicators in the 1980’s. They became standard equipment in nearly every vest and still are today. Strike indicators were a game changer. Then by the late 90’s, a new angling tactic bridged the Atlantic – euro-nymphing. It crept in slowly and has now taken nymph fishing to a whole new level.

None of this is to say that during these years, wet flies, or soft hackles for that matter, completely vanished. Ask any serious angler that fishes for steelhead. They undoubtedly have fly boxes full of wets. Along with those folks, there has long been a diehard band of serious trout bums that clung to soft hackles. Quietly keeping the faith, these anglers marched to the drum beat of Sylvester Nemes, whose books on the subject, beginning with The Soft Hackle Fly, helped carried the flame forward. 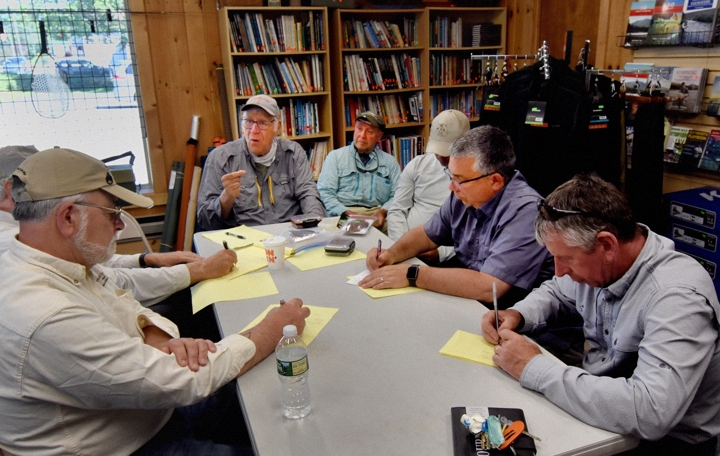 In recent years, interest in soft hackles has reemerged, for several good reasons. Trout love them for one thing. You can’t argue with that. And if you’re not sure which pattern to pick, add droppers to your leader, and give the trout a choice. Fish two soft hackles at once or even three at a time. Soft hackles are also extreme versatile. You can fish them from top to bottom and everywhere in between. Most anglers use a floating fly line and present soft hackles just under the surface. By dressing the fly with a touch of floatant, however, you can make them ride in the film like a dry fly or emerger. It is an excellent tactic. If the trout seem to be hanging deep, a sink tip takes your soft hackle down to them. Don’t have a sink tip with you? Try tying a heavy fly at the end of your tippet and then attach your soft hackle off the bend of that fly with a short piece of mono. This rig does the trick. To fish soft hackles at mid-depth, pinch a lead shot on the leader or consider using an intermediate fly line. Both do the job.

Right at the opening bell, Pat gave the class a wonderful reason to fish soft hackles. Leaning over as to offer a secret, he whispered in muted terms that soft hackles were a more relaxed way to fly-fish; “less competitive” he added, especially when compared to hard driving catch-every-fish-in-the-river attitude fostered by euro-nymphing. In our stress filled world, dialing back is a healthy thing. And where better to do than on the stream. I totally agree with Pat. Soft hackles are fun.