A Day on the Connecticut’s Salmon River

A Day on the Connecticut’s Salmon River

Last week we had a few warm days. Naturally I took advantage of them to do some trout fishing. The closest trout water to me is the Salmon River. It is only 30 minutes from my front door, so it was clearly my destination of choice.

The Salmon is a small river, running through the Salmon River State Forest on the Marlborough, Colchester line. Upstream of the covered bridge is a trout management area with a fly only section. And that is where I usually fish.

Regardless what stretch you visit, however, the Salmon is an attractive  freestone river. I first fished as a kid. So it hold fond memories as well. Fishing-wise, this is primarily a “put-and-take” fishery, although I bet there is some natural reproduction in the tributaries which include the Dickenson, the Blackledge, the Jeremy, and Fawn Brook.

With some snow still in the forest, water temperatures were likely in the low 40’s. That immediately suggested nymph fishing as a good choice. On my initial outing I went with a “Euro” nymph setup. For my second outing I switched to “indicator” style nymphing, just for a change of pace. But my best results came when the nymphs went back in the fly box and I tied on a soft hackle. Surprise, surprise. Didn’t expect that. 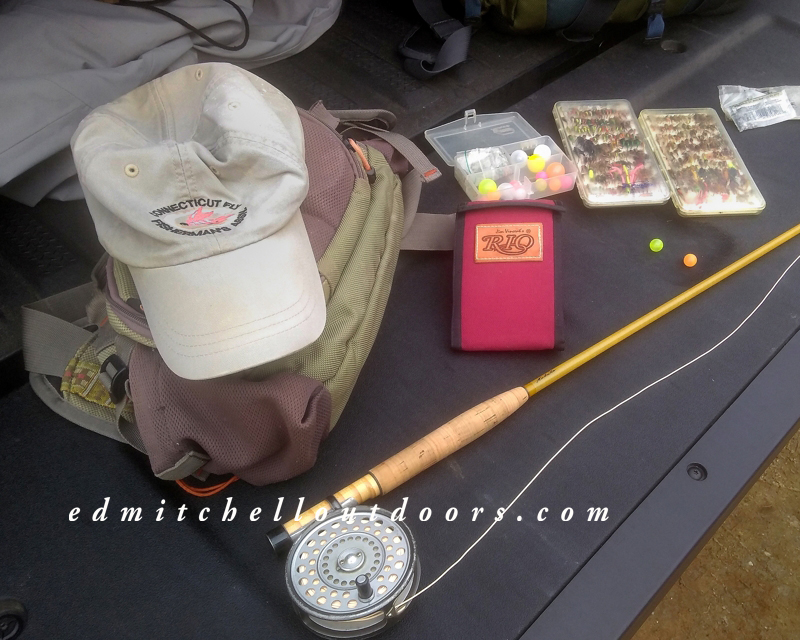 On the second outing, I fished my Kabuto. I’ve owned this sweet rod for 15 years. On small streams like the Salmon, its fantastic. In fact fiberglass fly rods in general truly shine in such locations. Man I love them. Not only are they a joy to cast, with a fish aboard a “glass” rod will have you smiling from ear-to-ear.