With the weather improving, my son is again hard at work on his rescued 1987 Aquasport. This journey began back in March of 2021, when we located, with the help of my friend Phil, this boat sitting in a backyard. Having been out in the weather for at least a decade, it was in tough condition, but the price was right. Soon after we had it back at my son’s house.

In the previous post, back in August of last year, my son removed the damaged, old transom. It had to go, folks. We both realized that this was likely the biggest structural issue we had to face in restoring this boat. We built a replacement using a 1.5″ thick Coosa board core, sandwiched in between several layers of fiberglass. It turned out pretty good! 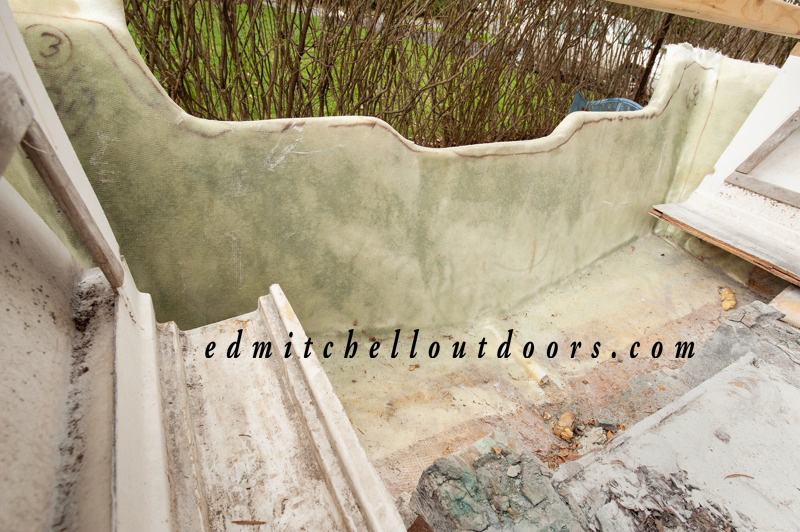 With a new transom in place, the next significant issue was to remove and

replace the deck. Unfortunately it was spongy and not useable. So last week, using a reciprocating saw, my son cut out the existing deck. The cavity you see is the well that originally held a 25 gallon gas tank. The original  deck had a rotten plywood core. Lighter, waterproof,  synthetic materials will be used instead.

Its going to take time to put in a new deck. And the hull liner is next to be removed. But after that the remaining work on this old Aquasport is cosmetic for the most part, as well as customizations my son wants to do. Not saying those things are going to be quick to accomplish. But they should be simpler.