A Trip to Purgatory, part 2 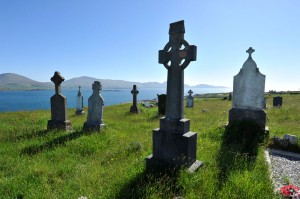 Crosses at the Church of St. Kilcatherine

Ok, our pilgrimage to purgatory continues….While wandering through the graveyard, I began to notice the variety of crosses used on the tombstones. As you would expect the Celtic Cross was evident in fair number; to my eye it is the most handsome of all. But there were many other styles, more than I had ever seen in one place. A few I recognized. The Canterbury, and the Maltese. Still, a large number of them were new to me. And I could only think that wide range of styles reflected the tremendous age of the graveyard, and the influence of many cultures. (Recent post) 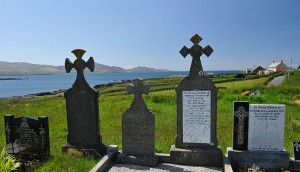 Way in the back of the church, there was one cross far older than the rest. It was a slab of stone that had been formed into a crude cross. I’m fairly certain the work had been by hand, using a hard rock to pound and chip away at the perimeter of the slab until the correct shape emerged. I’ll venture this cross was over a thousand years old.

Just beyond that there was a mound in the earth, roughly waist high. Covered with grass, I first thought it to be a buried boulder, but the more I studied the mound the more I became convinced it was man-made. For one thing I could see rocks peeking through the grass. And these rocks appeared to be stacked. But the most telling clue was right at my feet. There was hole dug the ground that looked like an entrance-way…… Now onward to part 3