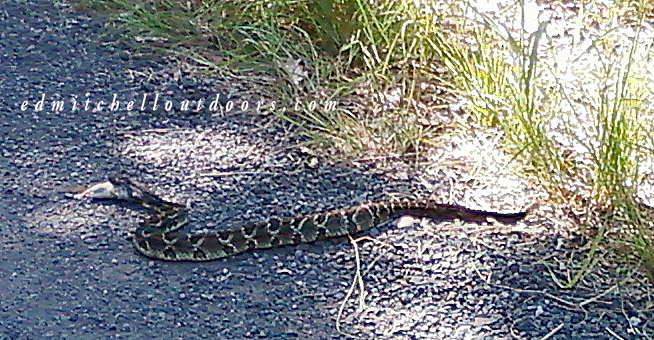 This morning I was driving my Jeep into the Meshomasic State Forest to shoot at the range. Up ahead of me, the range safety officers had pulled over. They were out and standing alongside their truck. Odd. So I killed the motor, and climbed out too. Man, I had to see what all the hoopla was about.

There are 14 different snakes in Connecticut. Among the most common are the garter snake, the milk snake, and the water snake. But the snake in the road was far rarer – a snake that few people in the state will ever see. It was a rattlesnake downing lunch; in this case a tasty chipmunk. It was easily the biggest rattler I had ever seen in Connecticut. Three foot or so long. From a fair distance I took a quick pix with my flip phone. Yeah, it’s not a great photo by any stretch, but it does give you an idea of the snake’s size.

Rattlesnake are an endangered species in my state. Not many left. And no this isn’t a Diamondback; it’s a kissing cousin called the Timber Rattlesnake. Crotalus horridus horridus for you science types. They can obtain 6 feet in length, but that’s extremely rare in the Northeast. Three and a half feet is about max in Connecticut. So this particular pit viper was no pup. By the way, down south in places like northern Florida, this critter is called a “canebrake” snake. No idea why.

Are Timber rattlesnakes dangerous? Well they’re thought to be somewhat mild mannered. In fact they rarely bite unless there is no alternative, no way to escape. Still don’t let that prompt  you to get close. These snakes pack a real wallop. And any bite requires immediate medical attention.

For a time the three of us watched the snake swallow. But after awhile the rattler let it be known he had enough of us ugly dudes. Yes, he started rattling, although with that mouthful, he wasn’t any real threat. Soon he slid off, gone into the grass, with his movable feast. Hey, don’t tread on me!       More recent post

“Be a Safe and Responsible Gun Owner”

This entry was posted in Environment, Looking Downward, On the Road, Shooting Sports, Wild Things. Bookmark the permalink.