Fished the Flats with Dave

On Friday, I fished the flats with Dave. I’ve spoke of him in the past; he is the most knowledgeable fly angler in this area. No kidding, this dude is a flats guru. So, an opportunity to fish with him is a opportunity to learn. I’m down with that.

We left the ramp at 6:15 in his john-boat. With a low scheduled around 9, we hoped to find a few “tailing” reds in the ebbing tide. It was a high dawn, quite a bit of cloud cover, and a light northeast breeze. Not perfect conditions, but not bad. 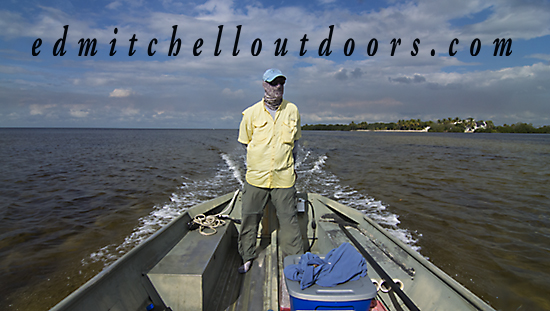 Fishing the Flats with Dave

At the flat, Dave and I climbed out and waded a mile of water, without seeing much at all. Disappointing. At that point I turned back to try fishing the outer edge of the sandbar. Dave continued wading. Eventually Dave caught two “tailers” roughly another mile to the south. His long trek had paid off.

Later we saw the smoke trail from Cape Canaveral, as project Orion rocketed skyward. Yeah, the journey to Mars has begun. An amazing sight.

By now, the sun was up and the clouds were breaking. Dave said he knew of a spot where we could sight-fish for cruising reds. Fine by me. We took a ride. When we arrived, the tide was flooding, and we had some sunlight to work with. We jumped out and began slowly moving in unison about forty feet apart. Immediate Dave spotted reds. Things were looking up. Within a few minutes, he hooked and landed a nice 28 “incher” on a crab fly. Dave is a force on these flats, believe me. My turn was next. I spied two reds traveling parallel to me. I cast ahead of them and, with luck, landed the lead fish. Yes, I’m learning a little day by day.