A little over a week ago, a large number of stripers were found dead on Dingwall Beach on Cape Breton Island. Biologist are working to find the cause of this striped bass kill. It could be a toxic agent in the water. It could be a virus or a bacteria.  The most likely cause, however, is a two fold shock – a sudden drop in temperature coupled with a sudden drop in salinity courtesy of heavy rains. 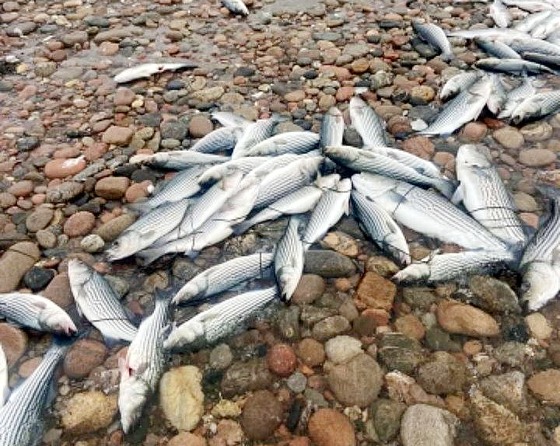 This type of environmental one-two punch is a known killer of fish in winter. For example, here in southern New England, it has caused die-off’s of menhaden.  Typically this occurs where fish are wintering over in the lower end of a coastal river. Fish holding over in the warm water release of a powerplant are also vulnerable. If the plant temporarily shuts, say for maintenance, those fish are exposed to a rapid change in temperature. This very scenario happened in Nova Scotia four or five years ago. The Trenton powerplant in Pictou Harbor shut down killing a small number of bass.